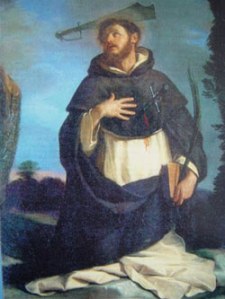 Saint Peter’s parents belonged to the heretical sect of the Cathari, theological descendants of the Manichees. Miraculously, he became Catholic, regardless of his heresy believing parents. Because of his Catholic convictions, he was ridiculed for his faith throughout his youth, it was preserved in purity and he became a Dominican. His father sent him to a Catholic school for a good early education, thinking that the heretical environment at home would keep Peter from being “deceived” by the teachings of the Catholic Church.

Nevertheless, one of the first things Peter learned there was the Apostle’s Creed, which the Cathari abhorred. Making conversation on day, his uncle asked him his lesson. The boy recited the creed and explained it in the Catholic sense, especially in those words: Creator of heaven and earth. In vain his uncle tried to persuade him it was false. He said that it was not God, but the evil principle that made all things that are visible; the Cathari viewed the physical world as ugly and bad, which is inconsistent with the concept of an infinitely perfect being. The boy’s resolute steadiness concerned his uncle, but his father laughed at his brother’s fears believing that the world would influence  his son into his beliefs.

When he was 15, Peter was sent to the University of Bologna, a hotbed of licentiousness. There he met Saint Dominic, and instantly threw himself at the saint’s feet to beg admission to the Order of Friar Preachers. Peter was present at the death of the founder soon after, and shared in the primitive zeal and courage of the sons of a saint.

While still a student, Peter experienced a severe trial. He was publicly reprimanded and punished because a brother, passing Peter’s cell late at night, thought he had heard women’s voices in his room. The voices were those of angels, who frequently visited the saint: but in his humility, he thought it better to accept the punishment and say nothing about the favors God had granted him. He was sent to the remote little Dominican convent of Jesi, in the marquisate of Ancona, to do penance, and his ordination was delayed.

Peter found great strength in prayer. Nevertheless, he was human and felt the sting of the disgrace. One day he complained to the Lord: “Lord, You know that I am innocent of this: Why do you allow them to believe it?” A sorrowful voice replied from the crucifix: “And I, Peter, what have I done that they should do this to Me?” Peter complained no more. The truth was eventually discovered, and Peter resumed his studies and was ordained to the priesthood.

Peter soon became a celebrated preacher throughout northern and central Italy, and, in 1232, an inquisitor to fight against the heresy that had infected his family and others in Lombardy. Many miracles (filling 22 pages in folio in the Acta Sanctorum) were worked through his prayers, to the rage of the heretics. Crowds nearly pressed him to death many times: some to ask his blessing, others to offer the sick to him to be cured, others to receive his holy instructions.

In one city, a prominent man had been won to heresy, because the devil, taking the form of the Blessed Virgin, appeared at the heretics’ meetings and encouraged him to join them. Peter, determined to win the man back to the truth, went to the meeting and, when the devil appeared in his disguise, held up a small pox in which he had placed a consecrated Host. “If you are the Mother of God,” cried Peter, “adore your Son!” The devil fled in dismay and many were converted.

Among other miracles, he predicted that he would be murdered by heretics, who indeed waylaid him on the road between Como and Milan. Peter went to his death singing the Easter Sequence, and fell unprotesting beneath the blows of his assassins. Carino cut his head with an ax, and then his companion Dominic stabbed him. As Peter rose to his knees and commended himself to God, Carino killed him with a blow of his axe to Peter’s side. One of his murderers, “Blessed” Carino, was touched by grace at the sight of a saint, was converted, and eventually became a Dominican at Forli. To him as to us, Peter had pointed out the way to heaven when he traced on the dust of the road, in his own blood, the creed that had lighted his path: “Credo in unum Deum.”

Peter’s body was ceremoniously buried in the Dominicans’ church dedicated to St. Eustorgius, in Milan, where he still rests. His head is kept separately in a crystal and gold case. So many miracles were worked at his shrine that many of the Cathari asked to be admitted to the Catholic Church.

Canonized: canonized by Pope Innocent IV in 1253–a single year after his death.

Patronage: Peter is the patron of midwives and inquisitors and venerated in Verona.

Representation: In art, Saint Peter is a Dominican with a gash or knife in his head. Occasionally, the knife is in his shoulder. Sometimes he is portrayed (1) with his finger on his lips; (2) writing credo in unum deum in the dust as he dies; (3) stabbed in the forest with his companion; or (4) with the Virgin and four female saints appearing to him