made his Solemn Profession a Dominican in 2011 and was elected as Father General later that year.  He is currently the Bishop Protector of the Order as well as the Presiding Bishop of the Unified Old Catholic Church,  teaching in the St. Thomas Aquinas Institute for Clergy Education, and strives to live his life in accordance with the Dominican charism.  He is a firm believer in community, in education, and in spreading the Love of Christ to all.  He lives in Albuquerque, NM with his husband, Scott, and their Sheltie, Ginger, Standard Poodle, Zoey, and their four cats, Mr. Binx, Cotton, Maxx, and Lucky. 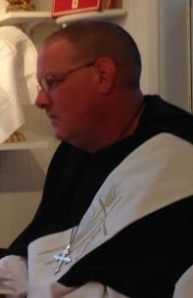 was ordained to the Diaconate in 2013 and his Solemn Profession as a Dominican in 2014.  He is active on the Commission for Ordained Ministries of the Unified Old Catholic Church  and is currently employed as the Industrial Parts Manager for O’Reilly Auto Parts in Albuquerque, NM.  He lives in Albuquerque with his husband, Michael, and  going to ITT Tech, studying Computer Network Administration.  He lives in Myrtle Beach, SC with his partner, Michael, and their Sheltie, Ginger, Standard Poodle, Zoey, and their four cats, Mr. Binx, Cotton, Maxx, and Lucky. 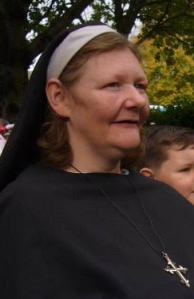 is a solemnly professed Sister in our Order and made her Perpetual Vows on 6 June 2014 in Blue Bell, PA. She is 51 years old and a widow who lives in the United Kingdom in the Historic Town of Newton-Le-Willows in Merseyside. She is the UK representative of the Unified Old Catholic Church where she serves as The Vicar General of our Church UK Diocese was ordained to the priesthood on 6th July 2013. Her chapel there is called the Chapel of St.Dominic & St.Stephen the Martyr.  She is a very dedicated and caring person who spends much time ministering to the most unloved and forgotten members of our society. She teaches that they are loved by the Lord as is anyone else, and believes these are the people who may not get chance to know about our Lord and the peace and salvation which only He can give. She has a good sense of humour and loves to make people smile. She has a 9 year old rescue dog named Snowy, who Mother Lady says is “lovely but is definitely a live wire. 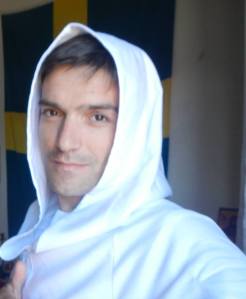 comes to us from Macedonia. His ministry includes working with the elderly, and he is focused on animal rights. Br. Igor made his Simple Profession in October of 2015 and his Solemn Profession in December of 2016.  He hopes to find friends who will join him in Macedonia, or wherever he will be, to help him bring more abandoned people to Christ.

Milan Komadina is 34 year old man from Serbia, Europe. Since he was a child he loved God and was taught in the Orthodox Christian tradition. He was baptized in an Orthodox Church at the age of 7. In his teenage period he was interested in learning more about Christianity and he started to read evangelical Christian books. In this period he desired to build stronger relationship with God. A few years later from 17 unti 20 he turned to Orthodoxy and started practicing prayer, fasting, eucharist and finally at the age the of 21 he decided to become monk. He spent 2 years in preparation with Abbot Damaskin. In this period he had to serve in the civil army, and he was using all possible free time to attend church liturgies and prayers. Next, he moved to a monastery where he lived as a novice for 1 year. In this period he became disappointed in the Orthodox church because of its clerical homophobia and he decided to search for Jesus elsewhere. He then turned to local protestant churches where he was even baptized again. He finished several Bible Schools and spent a lot of time reading Christian books written by various Christian authors. Unfortunately it seems that he felt a lack of love and acceptance in this church, too. Then there was a lonely period when he did not practice prayer for a few years. A few years later, at the age of 29 he met father Michael Becket online in November 2016. He shared that he was very sad about the lack of love he experienced in the church and he was accepted and recognized as a member of the Unified Old Catholic Church. Since then, he has practiced praying from catholic prayer book and he feels happy as a Christian. In February 2021 he desired to start the postulancy hoping to become an Independent Dominican one day in the future. He feels very grateful and blessed to be a part of the Unified Old Catholic family. He works as an assistant in an Insurance company. He speaks English, Hungarian, Serbian and uses Greek and Spanish. He likes reading, socializing, travelling, and is trying to live a life with prayer, gratefulness and positive attitude.

grew up in San Antonio and attended John Glenn Elementary, E.M. Pease Middle School and John Jay High School, graduating from high school in 1980. He played baseball and participated in Rodeo. He enlisted in the US Army and became a Military Policeman and attended undergraduate school at Palo Alto on the GI Bill taking his first religious class as an elective. Fr. Frank applied and was accepted to the Bexar County Sheriff’s Office where he started what turned out to be a 38-year career of service to his fellow man. He finished a B.A. in Christian Studies in 1990, from Wayland Baptist University.  In 2019 he entered the McGrath Institute for Church Life at the University of Notre Dame and completed an M.A. in Catholic Theology with a specialization in Liturgy.

He is married to Alma A. Bellino, and has several adopted brothers and sisters. He has 5 children and 14 grandchildren and is currently studying to become a Friar in the Order of Preachers, Independent. He is the Rector of St. Michael’s Catholic Parish in San Antonio, TX.