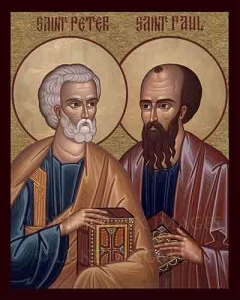 In today’s first two readings we find Peter and Paul in what looks to be in times of tribulation. They are both in prison, and in those days jail were not like the ones today. Most of the cells in those days were places where raw sewage would come in. There were no regular meals provided.  There was no heat, no air conditioning.  These were terrible conditions.

Peter is facing almost certain death.  Paul is nearing the end of his race and his death takes place shortly after this passage was written.

What I find from these passages is that despite their surroundings and predicaments neither Peter nor Paul are complaining, or saying “why God?” But rather they are rejoicing!

Today on the Feast of Sts. Peter and Paul I would like to refer to this message as “singing in the rain”.

We all go through trials, tribulations, and hard times in life. It is often easy to say, “Why, God, am I going through this?”   I am as guilty of this.

Back in November I started a deep depression which lasted till January. The whole time thoughts of, “Why God did you make me like this?  I’ll never be happy or content.”  Thoughts of worthlessness, and failure flooded me.

I tell you this because in those moments I doubted and wallowed in my own self-pity. I was asking, “Why God?  How could God have created me like this?”   Toward the end of this time period, I actually began to wonder, “Did God make a mistake when making me?”

When I actually gave voice to that question, and realized what I was feeling, it hit me hard.  I realized that in asking that question I fully gave into my humanity and questioned God in his plan and his being God.

You see, God doesn’t make mistakes.  Allowing trials to happen is God’s way of strengthening our faith, our resolve, and our relationship with him.  Often it also is to give hope and to strengthen us, and to bring others to him.

It is so tough during these down and low times to find joy, or to say it’s been great, or to thank God for the persecution.  Sometimes it is hard to praise God for all that you’ve been through or  are going through.  But Peter and Paul both point out that if we place our trust in God, he will see us through, and then he will do as he has promised.

What are we to learn from these scriptures?

We are not to dwell on the injustices that had befall us. Instead, we are to trust that God has us right where He wants us.  Like Peter and Paul, we are to turn our attention to others, the church, and to God.  You see, if we step back from our situations we might just see that no matter the outcome, God has provided us an opportunity to grow, to learn, and given us a chance to  become closer to him.   Romans 8:28 says, “All things work for the good for those who love the Lord and are called according to His purpose.”  In Jeremiah  29:11 we hear, “I know the plans I have for you,” declares the Lord, “plans to give you hope and a future.”  In John 16:33 Jesus Himself addressed this when he said, “Here on earth you will have many trials and sorrows; but cheer up!  I have overcome the world!”