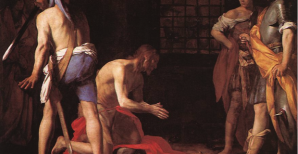 The Beheading of St. John the Baptist is a feast day that commemorates his martyrdom when John was beheaded upon the orders of Herod Antipas through the vengeful request of his step-daughter Salome and her mother Herodias.

Herod was a tetrarch of Galilee under the Roman Empire and he had imprisoned John in 27 AD because John the Baptist had reproved Him for divorcing his wife Phasaelis, and unlawfully taking Herodias, the wife of his brother, Herod Philip I.

On Herod’s birthday, Herodias’s daughter Salome, danced for the King and his guests. Her dancing pleased Herod to such an extent that in his drunkenness, he promised to give her anything for which she asked including up to half of his Kingdom.

When Salome asked her mother Herodias for what she should request, her mother told her to ask for the head of St. John the Baptist to be presented to her on a platter.

Herod was appalled by Salome’s request but as he had promised she could have anything for which she asked, he reluctantly granted her request and he had John executed in prison and delivered to Salome in the manner she had requested.

None of the sources give an exact date for the beheading of John the Baptist, but it is believed to have taken place around 28-29 AD at the fortress of Machaerus.