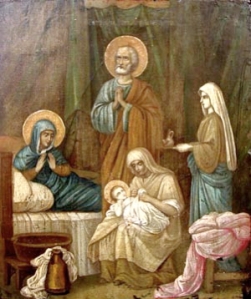 Today we celebrate the birth of the mother of our Lord and Saviour, the Blessed Virgin Mary.

The earliest known account of Mary’s birth is to be found in the protoevangelium of James (5:2), an apocryphal text from the late second century, with her parents Saint Anne and Saint Joachim.

Usually in the case of saints, the church commemorates their date of death, but both the births of saint John the Baptist and the feast of the blessed virgin Mary’s birth which we celebrate today, are traditionally celebrated  because besides the prophet Jeremiah, (Jer 1:5), these alone were holy in their very birth.

The original church which was built in the fifth century, was a Marian basilica erected on a spot that was known as the Shepherd’s pool and this is believed to have been the home of Mary’s parents.

The feast began to be celebrated in Rome towards the latter end of the seventh century and it was first established their when brought there by Eastern monks.

The wine growers in France called this feast “Our Lady of the Grape Harvest”. This is because the best grapes would be brought to the local church, they would be blessed and some of the bunches of these grapes would be attached to the hands of the statue of Mary.

A festival meal which includes these grapes is part of the tradition for this day.