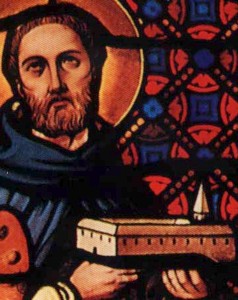 Bertrand was a secular priest under the Cistercians, missioner, and ardent opponent of Albigensianism when he first met Saint Dominic in the party of Bishop Diego. Bertrand may have been the one to recruit Dominic in the battle against the French heretics because they worked closely together in this mission for the rest of their lives.

Bertrand joined the first Dominican friars by receiving the habit at Toulouse in 1216. Dominic left him in charge of the community when he traveled to Rome to seek papal approval of the order. Bertrand’s zeal and experience played an important role in the founding of the Friar Preachers. When the brothers were sent out in little groups on missions, Bertrand was left in Paris with Matthew of France, where he helped to form the Dominican tradition of learning and governed the first foundation at Paris.

While Bertrand’s advice and prayers helped to establish the order, he is best remembered as the closest friend and traveling companion of Saint Dominic, until he was appointed as provincial of Provence. He witnessed the miracles and heavenly favors bestowed upon his friend and provided us with insightful testimony about the heart and mind of the founder.

Bertrand himself was credited with many miracles, both during his life and after his death. Others considered him a “second Dominic” in austerity and holiness, but he humbly overlooked his own claims to sanctity in his loving insistence on those of his friend.

Bertrand was preaching a mission to the Cistercian sisters of Saint Mary of the Woods near Garrigue, when he fell sick and died. He was buried in the sisters’ cemetery until the frequency of miracles suggested that he should be given a more suitable shrine. His relics were lost and shrine destroyed during the religious wars, but pilgrimages were still made to “Saint Bertrand’s Cemetery” until the time of the French Revolution.