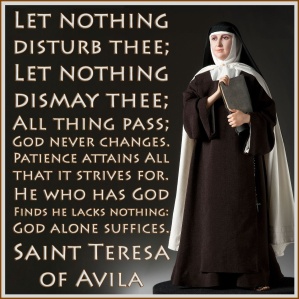 Spanish mystic, writer and reformer of the Carmelite order.

St Terese of Avila was an influential and pivotal figure of her generation. St Teresa (Teresa de Cepeda y Ahumada) was born in Avila, Spain on 28th March 1515. Her parents were both pious Catholics and in some ways inspired their daughter to take up a life of prayer. As a young child Teresa showed signs of a deeply religious nature; she would often retreat into silence for prayer and would enjoy giving alms to the poor. She was very close to her Mother, who provided a warm counterbalance, to the strictness of her father. However in her teens, Teresa’s mother passed away, leaving the young Teresa distraught at the void she felt. The young St Teresa tells of her despair and how she turned instinctively to the Virgin Mary for comfort.

“I threw myself down in despair before an image of the Mother of God. With many tears, I implored the Holy Virgin to become my mother now. Uttered with the simplicity of a child, this prayer was heard. From that hour on, I never prayed to the Virgin in vain.”

During her later teen years Avila lost some of her early piety and religious zeal. She recounted how she became interested in worldly matters and enjoyed the company of a wide circle of friends. She had a natural charm and found it easy to make friends. In return she enjoyed the compliments and friendships of others. However, she was not at peace, considering herself to be a miserable sinner; later she would look back in guilt at her early life. However this sense of being a “miserable sinner” was probably the result of a harsh self-judgment, encouraged by her fathers exacting religious standards. At the age of 16, her father decided to send Teresa to a convent school to be educated.

This re-ignited in Avila an interest in following a spiritual life and after some deliberation resolved to become a nun of the Carmelite Order. At the time the convent rules were not very strict; it was probably more relaxed than living with her father. At the time the convent accepted many people into the order, often for financial reasons. The convent became overcrowded and people were often judged not on the basis of spiritual intensity but on material possessions. In this climate, Teresa struggled to find time for quiet reflection; although she did start teaching people on the virtues of mental prayer.

Shortly after becoming a nun, Avila experienced a severe illness (malaria), which left her in great pain for a long period. At one point it was feared that her illness was so severe that she would not be able to recover. However during this period of intense physical pain, she began to increasingly experience divine visions and an inner sense of peace. These inner experiences of joy and peace seemed to transcend the intense physical pain of the body.

When she was a little better she resumed her prayers with renewed vigor. However after telling others of her visions and spiritual experiences, she was dissuaded from persuading them. Certain clergy felt they were just delusions of the devil. As a result, for many years Teresa lost the confidence to pursue her prayers and her spiritual life was almost put on hold. However, when Teresa was 41, she met a Priest who convinced her to go back to her prayers and implore God to come back. Initially, she had some difficulty sitting through prayers. She wryly remarked the end of the hour’s prayer couldn’t come soon enough. However, in the course of time, she became absorbed in deep contemplation in which she felt an ever growing sense of oneness with God. At times she felt overwhelmed with divine love. The experiences were so transforming, she at times felt the illumining grace of God would wash her soul away. She was so filled with divine contemplation it is said at times her body would spontaneously levitate. Teresa, however was not keen on these public displays of “miracles”. When she felt it happening she would ask other nuns to sit on her to prevent her floating away.

Teresa was not a just a quiet, placid saint. She had an endearing, natural quality; her life energy attracted and inspired many who were close. They admired her for both her outer charm and inner serenity. But at the same time her religious ecstasies also caused jealousy and suspicion. Unfortunately she was born into the period of the Spanish inquisition, during this time any deviation from the orthodox religious experience came under the strict observation and scrutiny. On one occasion Teresa complained to God about her mistreatment from so many different people. God replied to her saying “That is how I always treat my friends” with good humor St Teresa replied “That must be why you have so few friends”. St Teresa struggled because there were few who could understand or appreciate her inner ecstasies. However on the one hand she felt these experiences to be more real than ordinary events.

At the age of 43, St Teresa decided she wanted to found a new order recommitting to the values of poverty and simplicity. She wanted to move away from her present convent which made a life of prayer more difficult. Initially her aims were greeted with widespread opposition from within the town of Avila. However, with the support of some priests, the opposition waned and she was allowed to set up her first convent. St Teresa proved to be an influential leader and founder. She guided the nuns not just through strict disciplines, but also through the power of love, and common sense. Her way was not the way of rigid asceticism and self denial. Although she underwent many tribulations herself, to others she stressed the importance of experiencing God’s love.

St Teresa devoted much of the rest of her life to traveling around Spain setting up new convents based along the ancient monastic traditions. Her travels and work were not always greeted with enthusiasm, many resented her reforms and the implied criticism of existing religious orders. She often met with criticism including the papal nuncio who used the rather descriptive phrase “a restless disobedient gadabout who has gone about teaching as though she were a professor” St Teresa also had to frequently contend with difficult living conditions and her frail health. However she never let these obstacles dissuade her from her life’s task. She eventually died on October 4 at the age of 67. In 1566 she wrote Camino de perfeccion (Way of Perfection), to tell the nuns how to reach their goal. In 1580 she wrote what is considered her greatest work; the Castillo interior/ Las moradas (Interior castle/ The mansions). This involved describing the various stages of spiritual evolution leading to full prayer; she wrote Las Fundaciones (Foundations) from 1573 to 1582, so they would remember the early history of their order.

St. Theresa’s most popularly known writing, is a brief poem, which is known as her “Bookmark”, because it was found in her prayer book after her death in 1582. It has been variously translated into English, and has been very widely circulated.

Let nothing disturb you,
Let nothing frighten you,
All things are passing away:
God never changes.
Patience obtains all things.
Whoever has God lacks nothing;
God alone suffices.

Teresa lived in an age of exploration as well as political, social and religious upheaval. It was the 16th century, a time of turmoil and reform. She was born before the Protestant Reformation and died almost 20 years after the closing of the Council of Trent.

The gift of God to Teresa in and through which she became holy and left her mark on the Church and the world is threefold: She was a woman; she was a contemplative; she was an active reformer.

As a woman, Teresa stood on her own two feet, even in the man’s world of her time. She was “her own woman,” entering the Carmelites despite strong opposition from her father. She is a person wrapped not so much in silence as in mystery. Beautiful, talented, outgoing, adaptable, affectionate, courageous, enthusiastic, she was totally human. Like Jesus, she was a mystery of paradoxes: wise, yet practical; intelligent, yet much in tune with her experience; a mystic, yet an energetic reformer. A holy woman, a womanly woman.

Teresa was a woman “for God,” a woman of prayer, discipline and compassion. Her heart belonged to God. Her ongoing conversion was an arduous lifelong struggle, involving ongoing purification and suffering. She was misunderstood, misjudged, opposed in her efforts at reform. Yet she struggled on, courageous and faithful; she struggled with her own mediocrity, her illness, her opposition. And in the midst of all this she clung to God in life and in prayer. Her writings on prayer and contemplation are drawn from her experience: powerful, practical and graceful. A woman of prayer; a woman for God.

Teresa was a woman “for others.” Though a contemplative, she spent much of her time and energy seeking to reform herself and the Carmelites, to lead them back to the full observance of the primitive Rule. She founded over a half-dozen new monasteries. She traveled, wrote, fought—always to renew, to reform. In her self, in her prayer, in her life, in her efforts to reform, in all the people she touched, she was a woman for others, a woman who inspired and gave life.

Her writings, especially the “Way of Perfection”and “The Interior Castle”, have helped generations of believers.

In 1970, the Church gave her the title she had long held in the popular mind: Doctor of the Church. She and St. Catherine of Siena were the first women so honored.