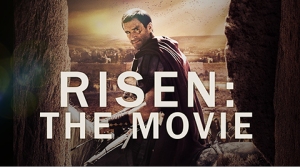 Risen is a 2016 American biblical drama film directed by Kevin Reynolds, and written by Reynolds and Paul Aiello. The film stars Joseph Fiennes, Tom Felton, Peter Firth, and Cliff Curtis, and was released by  Columbia Pictures  on February 19, 2016.

This is an excellent movie telling the Easter story from the sideways perspective not usually seen in movies and as such gives it a fresh and interesting perspective:  through the faith journey of a Roman Officer, the Tribune, Clavius.  The movie begins at an inn where the innkeeper, noticing Clavius` ring, brings Clavius to recount this story to him.  Clavius starts the moving story at the crucifixion scene with Jesus accompanied on either side by the thieves who are already on the crosses being crucified with Jesus.

Jesus`s mother, Mary was there among the large gathered crowd which consisted mostly of women. Clavius ordered the Roman Centurion at the scene to break the legs of the thieves but upon seeing Mary, Clavius decides to pierce Jesus through his side piercing his heart and lungs by himself instead. After Jesus and the thieves had succumbed to death, the bodies of the thieves were taken down and dragged to a pit where they were left to rot. In the film, I could almost imagine being stood there as the effects of the swarms of flies etc. made it appear very realistic.

Joseph of Arimathea, who was a secret disciple of Jesus, had sought and received permission from Pilate to take down Jesus` body and to place his body in a new family tomb he had. He took the letter of permission to Clavius and the body was given to Joseph.  The scribes however, were still very concerned about the stories going around told by Jesus` followers, namely that Jesus would rise again in three days.  They took it the Sanhedrin where they managed to get the Roman seal placed on the stone of Jesus` tomb and two Roman Guards were placed there to keep watch.

The Roman Guards had not slept in two days and had some wine with them which they drank and fell asleep, to be awakened by the noise of the ropes of the tomb blasting apart and the stone of the tomb rolling open. The guards saw Jesus in the body and panicked due to the fact that they, having fallen asleep, meant death by Roman law.  They fled to the sanctuary of the Jewish leaders who paid the only one who would speak to tell Clavius that the disciples of Jesus had stolen the body.  Clavius was ordered to search for the body of Jesus, and if necessary to find a body that could be identified as Jesus, so as to quash the rumors of Jesus’ resurrection.  All the recently executed dead were scrutinised to see if any could Jesus. None of the bodies that were looked would do.

Desperate to solve this riddle, Clavius hunted down first Mary Magdalen who had been seen near the tomb, then the other disciples. Clavius finally found the disciples all gathered together and Jesus was there amongst them. This part brought a smile to my heart, as this is where Clavius finally comes to believe and follows the disciples to Galilee where Jesus had stated they would see him again. The total change of heart and new found faith of Clavius was very realistically captured and was an extremely moving experience.

The disciples, together with Clavius, travelled to Galilee where they decided to do some fishing whilst waiting for Jesus but not one fish was caught. Then first thing in the morning, Peter saw someone walking along the beach and heard him tell them to try the right side, so out of faith Peter and the other disciples lowered the net as Jesus had instructed and the nets were over full with fish. When they came to the shore, they sat with Jesus and then watched as Jesus performed a miracle of healing on a man who was being kicked by others because he was a leper. After this, Jesus went to prepare a place for his disciples in his Fathers kingdom and he left the disciples the message that we still are told today, ”Go and tell tbe Gospel to all the world and to all nations”.

This film captured our hearts with the sheer beauty of the Lord’s love for us and what we should be doing today in his name for others. We are the disciples of today and are charged to do his works until his glorious return.  An inspiring story of faith, a fantastic movie, with the message given in a fresh and interesting perspective, we consider Risen to be a very moving and definiately worth watching film.  We give it 5 stars!!!!