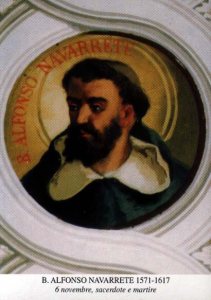 Dominicans were the first missionaries to Japan, and 1530 is given as the date of their martyrdom. However, no conclusive proof exists regarding their names or number, and Saint Francis Xavier rightly holds the title of apostle to this island kingdom.

Following in Xavier’s footsteps came other missionaries, and, for about 40 years, they worked with great results among the people. Then, in the closing years of the century, persecution flared, and the blood of martyrs cried out with a louder voice than that of the preachers.

Ferdinand took the Augustinian habit in Mentilla, and in 1603, was sent to Mexico, and thence to Japan in 1605 as vicar provincial. He worked at Osaka with great success until his capture and execution en route to Omura.

The first Dominican to die in the great persecution was Alphonsus Navarrete. When Alphonsus was very young, he gave up his inheritance to enter the Dominican Order in Valladolid and, after he had completed his studies, was sent to the Philippine missions. The great persecution had just begun in Japan. The year before Alphonsus left Spain, a group of 26 Christians, including many Franciscans and three Japanese Jesuits, were crucified in Nagasaki.

Despite the dangers, the Dominicans, who had been excluded from Japan for several years, yearned to go into the perilous mission field. Alphonsus in particular, after a trip to Europe to recruit missionaries in 1610, begged to be allowed to go to Japan. In the following year his offer was accepted and he was sent as superior of the missionary band. During the short interval of peace, they began their work, and, during six years of growing danger, they instructed the people and prepared them for the dreadful days to come.

The missionary career of Alphonsus was brief, and it was always overshadowed by the threat of death that beset the Christians in that unhappy country. However, in the few years of his apostolate, his accomplishment was immeasurable. Like his Divine Master, he went about teaching and baptizing the people. He is called the “Vincent de Paul of Japan,” because it was he who first began the tremendous task of caring for the abandoned babies there. He anticipated the work of the Holy Childhood Society by gathering up the homeless waifs and providing for their support from money he begged of wealthy Spaniards.

The warning bell of the great persecution was sounded with the martyrdom in Omura of two priests, a Franciscan and a Jesuit. Alphonus Navarrete and his Augustinian companion Ferdinand went to Omura with the intention of rescuing the relics of the martyrs and consoling the Christians. They were captured on the way, and with a young native catechist, were beheaded. Their bodies were thrown into the sea.

Five years later, on the hill of the holy martyrs of Nagasaki, more than 50 Christians sealed their faith with their blood. Some of the martyrs were beheaded, some were burned at the stake. In the group were nine Jesuits, including the famous Father Charles Spinola, nine Franciscans, and nine Dominicans, among whom were the Blesseds Alphonsus de Mena, Angelo Orsucci, and Hyacinth Orphanel. Louis Bertrand, a nephew of the saint of that same name, perished in the same persecution.

Thousands of Japanese Christians, from tiny children to old grandparents, died amid terrible torments in the profession of their faith. The anger of the persecutors was turned against all priests, brothers, and catechists, tertiaries, and Rosarians, and they made fearful attempts to stamp out all traces of the hated religion in the country. Pope Pius IX, in 1867, solemnly beatified 205 of the martyrs, among whom were 59 Dominicans of the first and third orders and 58 members of the Rosary Confraternity. Although all did not die at the same time nor place, they are listed under the name of Alphonsus Navarrete, who was the first to die.

Died: died the most terrible torments in Japan in 1617

Beatified: Pius IX beatified them in 1867