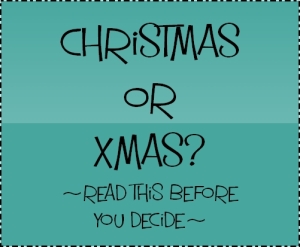 This has been quite the heated debate in the last few years. We have seen the memes and heard folks say:

Oh my!  I”m sure that most of you have seen the “The More You Know” ad spots on television.  Let’s consider this message on of those….So here we go…….

To begin:  Look around in your churches, my friends, especially those of you from a liturgical background, and see how many X’s you can find.

“Xmas” is a common abbreviation of the word “Christmas”.  The “-mas” part is from the Latin-derived Old English word for “Mass”, while the “X” comes from the Greek letter Chi, which is the first letter of the Greek word Χριστός, translated as “Christ”.  There is a common misconception that the word Xmas is a secular attempt to remove the religious tradition from Christmas by taking the “Christ” out of “Christmas”.  While “Xmas” is considered to be an informal abbreviation, and should never be used in formal writing, it is historically correct.

The word “Christ” and its compounds, including “Christmas”, have been abbreviated in English for at least the past 1,000 years, long before the modern “Xmas” was commonly used. “Christ” was often written as “XP” or “Xt”; there are references in the Anglo-Saxon Chronicle as far back as AD 1021. This X and P arose as the uppercase forms of the Greek letters χ and ρ used in ancient abbreviations for Χριστος (Greek for “Christ”), and are still widely seen in many Eastern Orthodox icons depicting Jesus Christ. The labarum, an amalgamation of the two Greek letters rendered as ☧, is a symbol often used to represent Christ in Catholic, Protestant, and Orthodox Christian Churches.

The Oxford English Dictionary (OED) and the OED Supplement have cited usages of “X-” or “Xp-” for “Christ-” as early as 1485. The terms “Xpian” and “Xtian” have also been used for “Christian”. The dictionary further cites usage of “Xtianity” for “Christianity” from 1634. According to Merriam-Webster’s Dictionary of English Usage, most of the evidence for these words comes from “educated Englishmen who knew their Greek”.In ancient Christian art, χ and χρ are abbreviations for Christ’s name. In many manuscripts of the New Testament and icons, Χ is an abbreviation for Χριστος, as is XC (the first and last letters in Greek, using the lunate sigma); compare IC for Jesus in Greek.

Thus, really and truly, the use of the “X” isn’t taking Christ out of Christmas at all.  And instead of protesting the use of “X” during the  Christmas season, wouldn’t we ALL be better people, the world be a better place, and Christ be better served,  if we kept that “X” in our words and deeds every day of the year?  Should we not celebrate Him always, 24/7/365?

So, having said all of the above,  may you keep Christ, not only in Christmas, but also in your hearts and minds and lives, every day and always.  Amen.