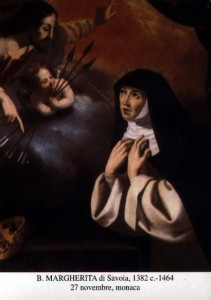 Margaret of Savoy, daughter of Duke Amadeo II, is one of three royal princesses who wore the Dominican habit and were beatified. In the 15th century, she was the glory of a family that has given several beati to the Church.

Born into the royal house of Savoy, Margaret grew up in a household in which piety and wealth were ordinary. Her own parents died when she was small, and she was educated by an uncle, who arranged an early marriage for her to the Marquis of Montferrat, Theodore Paleologus.

As queen of her fairly large domain, Margaret was the model of Christian rulers. She felt that it was her duty to exceed in charity and humility in the proportion that she was wealthier than those around her, and she devoted all of her time to God and to her neighbors. Her husband was a widower with two children, to whom she gave the greatest care. The hundreds of dependents on the large estates came to her for charity and instruction.

Disaster stuck Savoy several times in the years when she was wife and mother. Famine and plague came, making great demands on her time and her courage. Unhesitatingly, she went out to nurse the plague-stricken with her own hands, and she sent out food and clothing from her husband’s stores until it was doubtful if anything would be left. After this crisis passed, war hovered over the kingdom, and she prayed earnestly that they would be delivered from the horrors of invasion.

In 1418, the marquis died. His young widow was one of the most eligible women in Europe. Margaret sorrowed for her husband, but she made it clear to her relatives that they need not plan another marriage for her, as she was going to enter a convent. In order to live a life of complete renunciation, she decided to found a convent of her own at Alba in Liguria that would follow the ancient rule of Saint Dominic. Accordingly, she took over a cloister which had fallen into ruin, having only a few poor inhabitants, and rebuilt it for Dominican use. She dedicated the house to St. Mary Magdalen.

There is one very delightful story told of her sojourn in the convent. When she had been there many years, she one day had a young visitor; he was the son of one of her step-children. Hunting nearby, he had killed a doe, and he brought her the motherless fawn to tend. It was a pretty little animal, and it soon grew to be a pet. One legend was that the fawn was able to go and find any sister she would name, and, for several years, the animal had free rein of the halls and cells of the sisters. Perhaps it was true, though, since the house confessor told her that the deer must go. She took it to the gate and told it to go. It fled into the forest, and returned only when Margaret was about to die.

Margaret attained a high degree of contemplative prayer. One time Our Lord appeared to her and asked her whether she would rather suffer calumny, sickness, or persecution. Margaret generously accepted all three. Her offer was taken, and for the remaining years of her life she suffered intensely from all three sorrows (Dorcy). It should be noted that Saint Vincent Ferrer influenced Margaret to join the Dominican tertiaries (Benedictines).