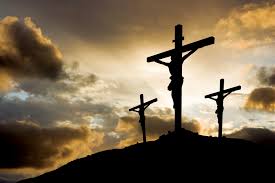 He died; the great Redeemer died,
And Israel’s daughters wept around;
A solemn darkness veiled the sky,
A sudden trembling shook the ground.

Here’s love and grief beyond degree,
The Lord of glory died for men:

Today, we stand at the centre of the holiest week in the Christian calendar, and of the most important event in human history. Today we remember not only the death of the man Jesus, not only humankind’s rejection of God, but of the opening of the way for all of humanity to a full relationship with God.

In less than 24 hours we have seen Jesus betrayed by one of his closest followers, interrogated, beaten and humiliated, and finally brutally murdered upon the cross of Calvary. At this point, the disciples would have been despairing; their master, who had seemed to promise so much, was gone. What were they to think of his message? Was he really the messiah or were they wrong? I’m sure that doubt and fear would have been at the forefront of their minds as they grieved for their spiritual leader. However, for us, with the hindsight that distance brings these events take on a different meaning. We should be able to see in the events of Good Friday a different message, not one of despair and fear, but one of hope.

On Thursday night, Jesus left the relative security of the Upper Room where the Eucharist had been instituted and went to the Garden of Gethsemane. The gospel reading today makes it clear to us that Judas, the betrayer, was well aware that this was a place that Jesus and His followers frequented, so why go there? This action is the start of a number of signs in today’s reading that point out for the keen observer that Jesus was totally in control of the events surrounding His passion.

Jesus knew very well that Judas would be able to find him and yet still went to the Garden. When the betrayer and the soldiers appeared Jesus didn’t run, He stood his ground. When approached He asked the mob who they were looking for, to which they responded “Jesus the Nazarene”; and it’s here that we see the first miracle of the Passion. Jesus responded with the words “I AM”. These words were so powerful that they caused the mob to turn away and fall to the ground; but why? Jesus was revealing to the mob, to His disciples and to us his true identity; I AM is the very name of God! When God appeared in the Burning Bush to talk to Moses what name did he give? I AM…Jesus was revealing through the power of His name that he was the Lord God and that no matter what was to follow we shouldn’t fear, but have confidence that all was in His control.

When the mob had recovered Jesus handed himself over to them and it was at this point that Peter leapt to his aide and cut off the ear of the servant; was Peter arrested with Jesus? Surely he should have been for such a violent crime? However, we know that he wasn’t; why? The answer is simple, the Lord of the Passion didn’t allow it. Before handing himself over Jesus said to the soldiers, “…so if you are looking for me, let these men go”; and instead of ignoring the “Nazarene criminal” the soldiers obeyed; the Lord of the Passion exerted His will to control the events.

If the Apostles and Disciples were able to see these events through our eyes their attitude towards what followed may have been totally different. Instead of seeing the acts of brutality performed against their friend, their Master, and their Messiah degrading Him and diminishing Him they may have been able to rest in the knowledge that Jesus has revealed himself as the Great I Am. They may have been able to stand firm knowing that He was in control of events and was truly Lord of all that was happening. They may have even had the foresight that in some way, the Messiah would overcome whatever seemingly earth shattering events were overtaking them.

And thus it should be for us; we should mourn, we should feel grief at the rejection of the Saviour of the whole human family however, we should also rest firm in the knowledge that Jesus is the Lord of the Passion and it is all part of the great plan for the redemption of humanity.