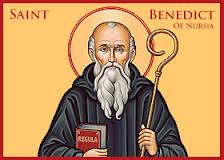 Benedict of Nursia (c. 480 – c. 547) known as the Father of Western monasticism had a huge influence in his own time and in succeeding centuries. His monks were a source of stability in the highly disordered state of Europe following the collapse of the Roman Empire and the invasions of the northern tribes (Vandals, Huns, etc.) and laid the ground for the emergence of the cultural wealth of the Renaissance from the 12th century onwards.

Benedict was born about 480, the son of a Roman noble from Nursia and it is believed he was a twin of St Scholastica. Little is known about his life as the only source is the Second book of Gregory’s Dialogues. It has been described as “the biography of the greatest monk, written by the greatest Pope, himself also a monk”. It is more a spiritual portrait than a factual biography.

Benedict began studies in Rome but left before completing them to become a hermit in Subiaco. Over a period of three years in solitude, Benedict matured both in mind and character.  At the same time he became deeply respected by people in the neighborhood, so that when the abbot of a nearby monastery died, the monks begged him to be their abbot. Although he did not agree with their lifestyle, he finally accepted. However, it did not work, so much so that the monks tried to poison him and he went back to his hermit’s cave. The legend is that they tried to poison his drink but, when he blessed the cup, it shattered. They then tried to kill him with poisoned bread but, when he blessed it, a raven came and snatched it away. Many other miracles were attributed to him and many people came to him for direction. So he built 12 monasteries each with a superior and 12 monks. He himself lived in a 13th with some whom he thought were more promising. Benedict, however, was the father or abbot of all the groups.

Benedict later traveled to Monte Cassino, near Naples, where he drew up the final version of his Rule. This contained much of the traditional monastic teaching of earlier monks like Cassian, Basil and probably also the so-called Rule of the Master, though much modified by Benedict. His vision was a life characterized by prudence and moderation rather than severe asceticism and lived within a framework of authority, obedience, stability, and community life. ‘Stability’ meant that a monk would generally stay permanently in the monastery which he had joined. It was a way of life which was complete, well-ordered and practical. The monk’s day was taken up with liturgical prayer, complemented by sacred reading and manual work of various kinds which took care of the community’s needs.

Benedict was not a priest and there is no evidence that he intended to found a religious order.
His principal goal and achievement was to write a Rule or way of life. Today’s Order of St Benedict (OSB) is of later origin and not a “religious order”” as commonly understood but rather a confederation of congregations into which the traditionally independent Benedictine abbeys have affiliated themselves for the purpose of representing their mutual interests, without however losing any of their autonomy. Benedict’s own personality is reflected in his description of the kind of person the abbot should be: wise, discreet, flexible, learned in the law of God, but also a spiritual father to his community. Gregory’s Dialogues spoke of him as having second sight and miraculous powers.
Because of its inner qualities and the endorsement it received from secular rulers and other founders of religious institutes, Benedict’s Rule became the standard monastic code in the early Middle Ages. Because of it flexibility, it could be adapted to the different needs of society in different places. In a world of civil turmoil with the break-up of the Roman Empire, it was the monasteries which became centers of learning, agriculture, hospitality, and medicine in a way which Benedict himself could never have imagined.

The best known symbols connected with Benedict are a broken cup (containing poison) and a raven. He is also shown wearing a monastic cowl and holding either the Rule or a rod for corporal punishment.  Benedict spent the rest of his life realizing the ideal of monasticism contained in his rule. He died at Monte Cassino, Italy, according to tradition, on 21 March 547.  He was named patron protector of Europe by Pope Paul VI in 1964. His feast day, previously 21 March, was moved in 1969 to 11 July, a date on which his feast had been celebrated in several places.

In today’s Gospel, we see Jesus traveling throughout the towns and villages of Galilee; preaching, teaching,proclaiming the Good News of the Kingdom; and he was healing all sorts of diseases and illnesses.  But, behind all that he does, is his deep compassion for the needs of the people. He sees them harassed and dejected, wandering and aimless like sheep without a guiding shepherd – a familiar image in the Old Testament . Then, looking at his disciples, he says, “The harvest is rich but the laborers are few, so ask the Lord of the harvest to send laborers to his harvest.” Jesus cannot do it all on his own. In fact, he will hardly step outside the boundaries of Palestine. He needs many helpers.

Today, the situation has not changed. The harvest is as big as ever; people are as lost and rudderless as they have ever been in spite of the great strides in knowledge we have made. Where are the laborers? They are not just the bishops, priests, religious brothers and sisters. That is a very narrow concept of laborers. Every single baptized person is called, in some way, to be a harvester, to help people find and experience the truth and love that God gives in Jesus. Every single person, in that sense and it is a very real sense, has a vocation, a call to serve and to build the Kingdom.
What and where and with whom is my vocation?  These, I’m sure questions St. Benedict often asked of God.  These are questions we ask still today.  We can look to the Rule of St. Benedict as an orderly way to live our lives and usher forth the Kingdom of Heaven.  His Rule is the Shepherd in a world of lost sheep.  Leading the flock to eternal salvation through our Lord and Savior Jesus Christ.