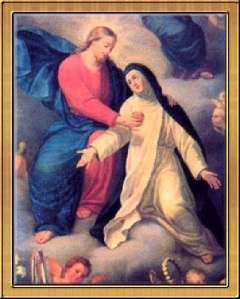 Catherine was born into poverty and hunger following the devastation of war. Her father, an unemployed locksmith, became despondent and quarrelsome as so many do when they lose their livelihood. Her mother supported the family by weaving coarse cloth at home. Catherine and her brother grew up in an atmosphere that was absent the peace of Christ.

Surprisingly, God reached the heart of little Catherine when she was only five. It was then that her mystical experiences began. Our Lady appeared to her while the tiny child was praying alone in her tiny room and told Catherine that Jesus wished to make her His spouse. Then as a child her own age, Jesus himself appeared, accompanied by many other saints including Catherine of Siena and Peter Martyr, and the Blessed Mother place the ring of espousal on her finger. Like the ring of Saint Catherine of Siena, it was visible to today’s saint but could not be seen by others.

Thereafter Catherine had frequent ecstasies and visions. Jesus always appeared to her as a man her own age. He talked with her, taught her how to pray, and several times took her heart away to cleanse it. When He appeared with His Cross, he offered to help Him. He let it rest on her should a moment, and it left a wound for the rest of her life. She also received the stigmata, though it too remained invisible to others and, at her request, it was only revealed by her confessor after her death.

And, of course, Jesus worked many miracles on behalf of His friend: made a broken dish whole again, and provided money and food when the family’s poverty was extreme. In times of trial, the heavenly hosts came to comfort the girl who received great consolation from the aspiration, “Jesus, my hope!”

Because her family opposed her becoming a Dominican, she took the habit of a tertiary. Her mystical experiences roused a storm of gossip among her neighbors, who were terrified at the lights and sounds that came from her home. The devil stirred up more trouble to mitigate her influence over other souls. Even the Dominican fathers ostracized her and eventually she was forced out of town and settled in Racconigi.

There rich and poor sought out Catherine for her wise counsel, prayers, and material assistance. She was almost continually in ecstasy. The particular object of Catherine’s prayers was the salvation of soldiers dying in battle. Numerous miracles occurred before and after her death, and a cult arose at her tomb almost immediately. Even her persecutors were aware of her sanctity and retracted their bitter words.

Born: in the diocese of Cuneo in the Piedmont, Italy, 1487

Beatified: Pope Pius VII confirmed her holiness and cult in 1810