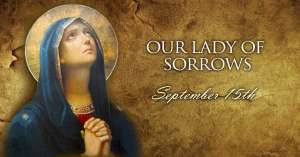 The title, Our Lady of Sorrows, given to our Blessed Mother, focuses on her intense suffering and grief during the passion and death of our Lord. Traditionally, this suffering was not limited to the passion and death event; rather, it comprised the seven dolors or seven sorrows of Mary, which were foretold by the Priest Simeon who proclaimed to Mary, “This child [Jesus] is destined to be the downfall and the rise of many in Israel, a sign that will be opposed and you yourself shall be pierced with a sword so that the thoughts of many hearts may be laid bare.” (Luke 2:34-35).

Devotion to the Seven Sorrows of Our Lady has its roots in Sacred Scripture and in Christian piety, which always associates the Blessed Mother with her suffering Son. Today’s feast was introduced by the Servites in order to intensify devotion to Our Lady’s Sorrows. In 1817 Pius VII — suffering grievously in exile but finally liberated by Mary’s intercession — extended the feast to the universal Church.

This feast dates back to the 12th century. It was especially promoted by the Cistercians and the Servites, so much so that in the 14th and 15th centuries it was widely celebrated throughout the Catholic Church. In 1482 the feast was added to the Missal under the title of “Our Lady of Compassion.” Pope Benedict XIII added it to the Roman Calendar in 1727 on the Friday before Palm Sunday. In 1913, Pope Pius X fixed the date on September 15. The title “Our Lady of Sorrows” focuses on Mary’s intense suffering during the passion and death of Christ. “The Seven Dolors,” the title by which it was celebrated in the 17th century, referred to the seven swords that pierced the Heart of Mary. It is dedicated to the spiritual martyrdom of Mary, Mother of God, and her compassion with the sufferings of her Divine Son, Jesus. In her suffering as co-redeemer, she reminds us of the tremendous evil of sin and shows us the way of true repentance. As Mary stood at the foot of the Cross on which Jesus hung, the sword of sorrow Simeon had foretold pierced her soul.

Below are the seven sorrows of Mary:

1. The prophecy of Simeon: “And Simeon blessed them, and said to Mary his mother: Behold this child is set for the fall and for the resurrection of many in Israel, and for a sign which shall be contradicted; And thy own soul a sword shall pierce, that out of many hearts thoughts may be revealed.” – Luke II, 34-35.

3. The loss of the Child Jesus in the temple: “And having fulfilled the days, when they returned, the Child Jesus remained in Jerusalem; and His parents knew it not. And thinking that he was in the company, they came a day’s journey, and sought him among their kinsfolk and acquaintance. And not finding Him, they returned into Jerusalem, seeking Him.” Luke II, 43-45.

4. The meeting of Jesus and Mary on the Way of the Cross: “And there followed Him a great multitude of people, and of women, who bewailed and lamented Him.” – Luke XXIII, 27.

5. The Crucifixion: “They crucified Him. Now there stood by the cross of Jesus, His Mother. When Jesus therefore had seen His Mother and the disciple standing whom he loved, He saith to His Mother: Woman: behold thy son. After that he saith to the disciple: Behold thy Mother.” – John XIX, l8-25-27.

6. The taking down of the Body of Jesus from the Cross: “Joseph of Arimathea, a noble counselor, came and went in boldly to Pilate, and begged the body of Jesus. And Joseph buying fine linen, and taking Him down, wrapped Him up in the fine linen.” – Mark XV, 43-46.

7. The burial of Jesus: “Now there was in the place where He was crucified, a garden; and in the garden a new sepulcher, wherein no man yet had been laid. There, therefore, because of the parasceve of the Jews, they laid Jesus, because the sepulcher was nigh at hand.” John XIX, 41-42.

The Angelic Salutation (Hail Mary)
Hail Mary, full of grace, the Lord is with thee; Blessed art thou amongst women, and blessed is the fruit of thy womb, Jesus. Holy Mary, Mother of God, pray for us sinners, now and at the hour of our death. Amen.

Prior to the Second Vatican Council, there were two feasts devoted to the sorrows of Mary. The first feast was insitituted in Cologne in 1413 as an expiation for the sins of the iconoclast Hussites. The second is attributed to the Servite order whose principal devotion are the Seven Sorrows. It was instituted in 1668, though the devotion had been in existence since 1239 – five years after the founding of the order.

Prayer to our Sorrowful Mother for a particular grace:

O, mother most holy and sorrowful, Queen of Martyrs, you who stood by your Son as He agonized on the cross; by the sufferings of your life, by that sword of pain that pierced your heart, by your perfect joy in heaven, look down on me kindly as I kneel before you, sympathizing with your sorrows and offering you my petition with childlike trust.

Dear Mother, since your Son refuses you nothing, ask of His Sacred Heart to mercifully grant what I ask, through the merits of His sacred passion, along with those of your sufferings at the foot of the cross.

Mother most merciful, to whom shall I go in my misery if not to you who pities us poor sinful exiles in this valley of tears? In our name, offer Jesus but one drop of His most precious blood, but one pang of His loving heart. Remind Him that you are our sweetness, our life and our hope, and your prayer will be heard.

Here are seven graces the Blessed Virgin Mary grants to souls who honor Her daily by saying seven Hail Marys and meditating on Her tears and Dolors. The devotion was passed to us by Saint Bridget.