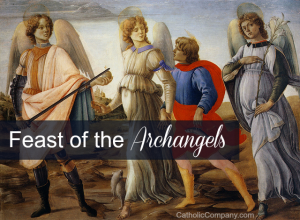 Today we gather as a church to honour and commemorate the Feast of the Archangels, Michael, Gabriel and Raphael, the Archangels of God’s Heavenly Hosts. We only know the names of these three, even though there are believed to be seven Archangels if not more. Let us take a look at what we know from the Holy Scriptures about these three Archangels of God. As St. Michael is the Prince of the heavenly hosts, let us begin with him.

His name means “Who is like God”. (This is a rhetorical question, as obviously means nobody is like God as God is the highest there ever was or ever can be).

St. Michael is mentioned by his name in three books of Holy  Scripture:

In Daniel, he is described as “one of the chief princes” in the heavenly hierarchy (Dan. 10:13). He is also described to Daniel as “your prince” (Dan. 10:12). The meaning of this phrase is later clarified, and Michael is described as “the great prince who has charge of your people” (Dan. 12:1). He is thus depicted as the guardian angel of Israel. These same passages also refer to Michael doing battle against the spiritual forces at work against Israel.

In Jude 9, Michael is said to have contended with the devil over the body of Moses. On this occasion, we are told, “he did not presume to pronounce a reviling judgment upon him, but said, ‘The Lord rebuke you.’”

In Revelation, Michael and his angels are depicted fighting the devil and casting them out of heaven (Rev. 12:7-8). He is also commonly identified as the angel who binds the devil and seals him in the bottomless pit for a thousand years (Rev. 20:1-3), though the name “Michael” is not given on this occasion.

His name means “God is my warrior” (meaning, essentially, “God is my defender”).

St. Gabriel is mentioned  in two books of Holy Scripture:

In Daniel, he is assigned to help Daniel understand the meaning of a vision he has seen (Dan. 8:16). Later, while Daniel is in a prolonged period of prayer, Gabriel comes to him (Dan. 9:21) and gives him the prophecy of “seventy weeks of years” concerning Israel’s future (Dan. 9:24-27).In Luke, he appears to Zechariah the priest and announces the conception and birth of John the Baptist (Luke 1:13-19). Later, he appears to the Virgin Mary and announces the conception and birth of Jesus Christ (Luke 1:26-33).

St. Raphael is mentioned in only book of Scripture: Tobit.

In Tobit, the blind Tobit and the maid Sarah, whose seven husbands have been killed by the demon Asmodeus, pray to God.

The prayer of both was heard in the presence of the glory of the great God. And Raphael was sent to heal the two of them: to scale away the white films of Tobit’s eyes; to give Sarah the daughter of Raguel in marriage to Tobias the son of Tobit, and to bind Asmodeus the evil demon, because Tobias was entitled to possess her (Tob. 3:16-17).

Raphael thus becomes a travelling companion of Tobias, posing as a relative named Azarias son of Ananias (Tob. 5:12). He eventually binds the demon, enabling Tobias to safely marry Sarah, and provides the means for Tobit to be healed of his blindness.

I am Raphael, one of the seven holy angels who present the prayers of the saints and enter into the presence of the glory of the Holy One (Tob. 12:15).

These Archangels serve the will of God by protecting , guarding and healing us at God’s request. God has ensured his children always have the full protection not only of God himself, but also from all the hosts of heaven. Our Father loves and protects his children, only ensuring all is best for them. Let us give our thanks and praise for the wonderful gift of His Archangels, and of all the hosts of heaven to our God and heavenly Father.

Let us end with the prayer of St Michael:

St. Michael the Archangel, defend us in battle.

Be our defense against the wickedness and snares of the Devil.

May God rebuke him, we humbly pray,

and do thou, O Prince of the heavenly hosts,

by the power of God, thrust into hell Satan, and all the evil spirits,

who prowl about the world

seeking the ruin of souls. Amen.