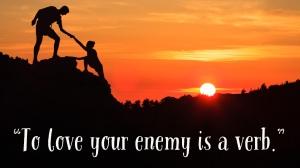 Gospel: Luke 6:27-38
Jesus said to his disciples:
To you who hear I say,
love your enemies, do good to those who hate you,
bless those who curse you, pray for those who mistreat you.
To the person who strikes you on one cheek,
offer the other one as well,
and from the person who takes your cloak,
do not withhold even your tunic.
Give to everyone who asks of you,
and from the one who takes what is yours do not demand it back.

Do to others as you would have them do to you.
For if you love those who love you,
what credit is that to you?
Even sinners love those who love them.
And if you do good to those who do good to you,
what credit is that to you?
Even sinners do the same.
If you lend money to those from whom you expect repayment,
what credit is that to you?
Even sinners lend to sinners,
and get back the same amount.
But rather, love your enemies and do good to them,
and lend expecting nothing back;
then your reward will be great
and you will be children of the Most High,
for he himself is kind to the ungrateful and the wicked.
Be merciful, just as your Father is merciful.
“Stop judging and you will not be judged.
Stop condemning and you will not be condemned.
Forgive and you will be forgiven.
Give, and gifts will be given to you;
a good measure, packed together, shaken down, and overflowing,
will be poured into your lap.
For the measure with which you measure
will in return be measured out to you.”

As I reflected on today’s Gospel one person came to mind, Mohandas (Mahatma) Gandhi. He is known for practicing non-violence and liberating India from British rule through his practice of non-violence. He was a Hindu born in 1869 in Gujarat in India. He went to London to study law and was called to the bar. In 1893 he was engaged by a Muslim firm in South Africa for legal work. There were many Indians in South Africa working in the mines but unlike everybody else they had to carry a special pass. While there Gandhi developed his theory of non-violent resistance to injustice. The Indians burned their passes. After that the Indians were all fingerprinted, but through Gandhi’s efforts the South African authorities discontinued fingerprinting them.

I saw the Gandhi movie when it was released some years ago and I watched a video of it again recently. In it a white clergyman, Charlie Andrews, went for a walk one day with Gandhi in South Africa. There were three white young men on the street with stones in the hands. The clergyman suggested they turn back. Instead Gandhi, a Hindu, started quoting Jesus from today’s Gospel to the clergyman, “to the man who slaps you on one cheek present the other cheek too.” (Luke 6:29) The clergyman said this was not to be understood literally, it was metaphorical. Gandhi replied saying he “suspected that Jesus meant one must show courage and be willing to take one blow or several blows to show that you will not strike back nor turn aside. That calls on something in the enemy that makes his hatred for you decrease and his respect for you increase.” It is a scene in the film full of irony. A Hindu quotes today’s Gospel to a Christian clergyman showing the Christian clergyman how Jesus’ teaching is to be lived in daily life. It is easy to resort to violence but the most courageous thing is to respond peacefully.

In 1915 Gandhi returned to India. He was not long back in India when he began taking the lead in the struggle for independence from Britain. He never wavered in his unshakable belief that the best means of achieving results is through non-violence. Whenever the Muslims or Hindus committed acts of violence against each other or the ruling British he fasted until the violence stopped. In 1947 independence finally came but he despaired that the country was split in two, into Muslim Pakistan and Hindu India. Violence followed the independence and he fasted almost to the point of death which brought an end to the violence. During that fast, toward the end of the Gandhi movie, a Hindu came to him and said, “I am going to hell.” Gandhi asked him, “Why?” He said he had killed a Muslim boy. Gandhi replied, “I know a way out of hell. Find a child with no parents and raise it. Only make sure it is a Muslim child and raise it as a Muslim.”

Gandhi was assassinated in 1948 walking through a crowded garden on the way to evening prayers in New Delhi. A famous quotation from Gandhi is, “Non-violence is the greatest force at the disposal of mankind. It is mightier than the mightiest weapon of destruction devised by the ingenuity of man.” Non-violence is not being passive. Gandhi would never suggest that you silently put up with injustice. He said injustice must be fought but not with violence. In our Gospel today (Luke 6:27-38) you are not being asked to suffer hurt from anyone but to respect someone even if they hurt you.

You might say to me, “I can accept that non-violence is the best way to achieve results. I can see its logic. But when you say to me to love my enemy that is a step too far.” I would respond in this way. There are many different words used for love in the Greek language in which the New Testament was written but the word for love that Jesus uses in our Gospel passage has nothing to do with being sentimental. Instead the love in our Gospel today means ‘wanting what is best for the other person.’ Jesus explains what he means by that type of love, “do good to those who hate you, bless those who curse you, pray for those who treat you badly.” (Luke 6:27-28) Loving our enemies is not avoiding them, or tolerating them or being indifferent to them. Instead it is being positive to them. That is the love David showed to Saul in our first reading (1 Sam 26). He had an opportunity to kill him but did not. From the human point of view he was foolish not to have killed him because Saul wanted to kill him, but David is an example of the love that Jesus talks of in our Gospel.

You might say to me, “It is all very well for you to preach up there about loving your enemy but you don’t have a clue. If you knew what so-and-so did to me you would not be preaching about love of enemies.” This is how I would respond. When the hurt caused to us by the other person is severe we have painful memories afterwards. The first step in forgiving the other person is to heal those painful memories. As you remember the painful event imagine Jesus with you comforting you. Do that for as long or as often as you need. If the hurt is very painful the most courageous thing to do is to seek therapy or counseling of some kind. That is not a sign of weakness but a sign of strength. When memories are being healed we can forgive.

You might still say to me that I still don’t have a clue and there is no way that you could love your enemy after what has been done to you. If the pain and hurt is as bad as that, and sometimes it is, I would say that forgiving in this situation is a grace or a miracle for which we need to pray. People have forgiven the most extraordinary crimes because they were graced by God to do so. It is not impossible to love enemies. If it were impossible Jesus would not have asked us to do so. If he asked us to love enemies it is certainly possible. So let us pray for the grace to forgive.

If we exact an eye for an eye the whole world will go blind. Jesus asks us to put love into life, to break the spiral of violence and hatred and negativity by putting love into life. Love is the only means to achieve anything. Jesus said to his disciples,

“I say this to you who are listening. Love your enemies, do good to those who hate you, bless those who curse you, pray for those who treat you badly. To the man who slaps you on one cheek, present the other cheek too….Love your enemies. ” (Luke 6:27-29)