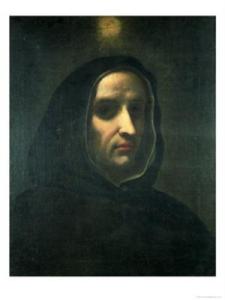 Fra Angelico is known in Italy as il Beato Angelico, the term “Il Beato” (“Blessed One”) being already in use during his lifetime or shortly thereafter, in reference to his skills in painting religious subjects. In 1982 Pope John Paul II conferred beatification, in recognition of the holiness of his life, thereby making this title official. Fiesole is sometimes misinterpreted as being part of his formal name, but it was merely the name of the town where he took his vows as a Dominican friar, and was used by contemporaries to separate him from other Fra Giovannis. He is listed in the Roman Martyrology as Beatus Ioannes Faesulanus, cognomento Angelicus—”Blessed Giovanni of Fiesole, nicknamed Angelico”.

Vasari wrote of Fra Angelico:  But it is impossible to bestow too much praise on this holy father, who was so humble and modest in all that he did and said and whose pictures were painted with such facility and piety.

Fra Angelico was born Guido di Pietro at Rupecanina,[7] in the Tuscan area of Mugello, near Fiesole towards the end of the 14th century and died in Rome in 1455. Nothing is known of his parents. He was baptized Guido or Guidolino. The earliest recorded document concerning Fra Angelico dates from October 17, 1417 when he joined a religious confraternity at the Carmine Church, still under the name of Guido di Pietro. This record also reveals that he was already a painter, a fact that is subsequently confirmed by two records of payment to Guido di Pietro in January and February 1418 for work done in the church of Santo Stefano del Ponte. The first record of Angelico as a friar dates from 1423, when he is first referred to as Fra Giovanni, following the custom of those entering a religious order of taking a new name. He was a member of the Dominican community at Fiesole. Fra, an abbreviation of frate (from the Latin frater), is a conventional title for a friar or brother.

According to Vasari, Fra Angelico initially received training as an illuminator, possibly working with his older brother Benedetto who was also a Dominican and an illuminator. San Marco in Florence holds several manuscripts that are thought to be entirely or partly by his hand. The painter Lorenzo Monaco may have contributed to his art training, and the influence of the Sienese school is discernible in his work. He had several important charges in the convents he lived in, but this did not limit his art, which very soon became famous. According to Vasari, the first paintings of this artist were an altarpiece and a painted screen for the Carthusian Monastery of Florence; none such exist there now.[2]

From 1408 to 1418 Fra Angelico was at the Dominican friary of Cortona where he painted frescoes, now destroyed, in the Dominican Church and may have been assistant to or follower of Gherardo Starnina. Between 1418 and 1436 he was at the convent of Fiesole where he also executed a number of frescoes for the church, and the Altarpiece, deteriorated but restored. A predella of the Altarpiece remains intact in the National Gallery, London which is a superb example of Fra Angelico’s ability. It shows Christ in Glory, surrounded by more than 250 figures, including beatified Dominicans.

In 1436 Fra Angelico was one of a number of the friars from Fiesole who moved to the newly-built Friary of San Marco in Florence. This was an important move which put him in the centre of artistic activity of the region and brought about the patronage of one of the wealthiest and most powerful members of the city’s Signoria, Cosimo de’ Medici, who had a large cell (later occupied by Savonarola) reserved for himself at the friary in order that he might retreat from the world. It was, according to Vasari, at Cosimo’s urging that Fra Angelico set about the task of decorating the monastery, including the magnificent Chapter House fresco, the often-reproduced Annunciation at the top of the stairs to the cells, the Maesta with Saints and the many smaller devotional frescoes depicting aspects of the Life of Christ that adorn the walls of each cell.

In 1439 he completed one of his most famous works, the Altarpiece for St. Marco’s, Florence. The result was unusual for its times. Images of the enthroned Madonna and Child surrounded by saints were common, but they usually depicted a setting that was clearly heavenlike, in which saints and angels hovered about as divine presences rather than people. But in this instance, the saints stand squarely within the space, grouped in a natural way as if they were able to converse about the shared experience of witnessing the Virgin in glory. Paintings such as this, known as Sacred Conversations, were to become the major commissions of Giovanni Bellini, Perugino and Raphael.

In 1445 Pope Eugenius IV summoned him to Rome to paint the frescoes of the Chapel of the Holy Sacrament at St Peter’s, later demolished by Pope Paul III. Vasari claims that at this time Fra Angelico was offered by Pope Nicholas V the Archbishopric of Florence, and that he refused it, recommending another friar for the position. While the story seems possible and even likely, if Vasari’s date is correct, then the pope must have been Eugenius and not Nicholas. In 1447 Fra Angelico was in Orvieto with his pupil, Benozzo Gozzoli, executing works for the Cathedral. Among his other pupils were Zanobi Strozzi.

From 1447 to 1449 he was back at the Vatican, designing the frescoes for the Niccoline Chapel for Nicholas V. The scenes from the lives of the two martyred deacons of the Early Christian Church, St. Stephen and St. Lawrence may have been executed wholly or in part by assistants. The small chapel, with its brightly frescoed walls and gold leaf decorations gives the impression of a jewel box. From 1449 until 1452, Fra Angelico was back at his old convent of Fiesole, where he was the Prior.

In 1455 Fra Angelico died while staying at a Dominican Convent in Rome, perhaps in order to work on Pope Nicholas’ Chapel. He was buried in the church of Santa Maria sopra Minerva.

When singing my praise, don’t liken my talents to those of Apelles.
Say, rather, that, in the name of Christ, I gave all I had to the poor.

I, Giovanni, am the flower of Tuscany.

Angelico was reported to say “He who does Christ’s work must stay with Christ always”. This motto earned him the epithet “Blessed Angelico”, because of the perfect integrity of his life and the almost divine beauty of the images he painted, to a superlative extent those of the Blessed Virgin Mary.

From various accounts of Fra Angelico’s life, it is possible to gain some sense of why he was deserving of canonization. He led the devout and ascetic life of a Dominican friar, and never rose above that rank; he followed the dictates of the order in caring for the poor; he was always good-humored. All of his many paintings were of divine subjects, and it seems that he never altered or retouched them, perhaps from a religious conviction that, because his paintings were divinely inspired, they should retain their original form. He was wont to say that he who illustrates the acts of Christ should be with Christ. It is averred that he never handled a brush without fervent prayer and he wept when he painted a Crucifixion. The Last Judgment and the Annunciation were two of the subjects he most frequently treated.