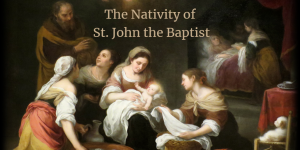 Today, we as a church come together to commemorate the birth of St John the Baptist, often called the ‘Forerunner’.

John was the son of Zechariah and Elizabeth. In the Gospel of Luke, we are told that Zechariah was told beforehand about the birth, and that he was to be named John. The name John means “God is Gracious” (LK 1 :8=2:3).

John whilst still within his mother’s womb, instantly recognised the presence of Our Lord Jesus, who was also still in his mother’s womb, when Mary went to visit her cousin Elizabeth (LK 1 :41). John leapt for joy in Elizabeth’s womb as soon as Mary and Elizabeth met, and this is when John was cleansed of original sin. This came to pass just as the Angel Gabriel had previously promised Zechariah in LK 1 :15.

When John was older, he left the home of his parents and went to live his life in the desert. He wore only a garment made from camel skin and only had Locusts and wild honey to eat. John would preach in the desert (MK 1:6; Matt 3:4).

John went about preaching and proclaiming about the Kingdom of God and of a time of upcoming judgement. He invited those who wanted to repent, to allow him to baptise them as a sign of their repentance.

John, just like the  prophets, disturbed the comfortable and gave much comfort to the disturbed. The message of John soon spread far and wide. The Gospel of Mark tells us that all peoples of both Jerusalem and Judea travelled to him to confess their sins as John baptised them in the river Jordan (MK 1:5).

John shows his humility clearly to us because he never wanted any attention for himself, he always directed people to Jesus. Some wondered if John was the Messiah, but John reassured them that indeed he wasn’t the messiah, and he declared that his ministry was merely a preparation for the coming of the Messiah. John said, “I have baptised you with water, but He will baptise you with the Holy Spirit.” (MK 1:8)

It was after being baptised by John, that our Lord Jesus began his Earthly ministry. When John had been baptised by John, John again showed his humility as again, he turned his attention to Jesus, declaring, “He must increase, I must decrease”(JN 3:30).

St John the Baptist is an excellent example that we as Christians should take much notice of within our lives of faith. Just as John always showed his humility by turning his attention away from himself and towards our Lord Jesus, we too, also need to show this same humility if we are truly to serve and follow the Lord. We also, must turn attention away from ourselves and towards Jesus. Just as John himself declared, “He must increase, I must decrease”.

O glorious St John the Baptist, greatest prophet among those born of woman, although you were sanctified in your mother’s womb and lived a most innocent life, nevertheless, it was your will to live in the wilderness of the desert, there to devote yourself to the practice of austerity, penance and humility;

Obtain for us by your intercession, the grace of the Lord to be wholly detached within our hearts, from earthly goods and self attention. Increasing our humility and service, by making ourselves far lesser and in the never ending increasing, to be ever greater within our hearts and lives.