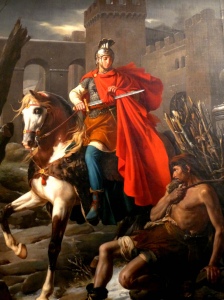 St. Martin of Tours was born in what is modern day Northern Yugoslavia and western Hungary. In about 316 A.D., when St. Martin was born, it was then known as Sabaria of Upper Pannonia.  Saint Martin was born to pagan parents – his father being an officer of the Army of Rome.  Due to a military transfer, Martin and his family relocated to Pavia in the north of Italy.  It was here, at Pavia, that Martin first encountered Christianity.  Being so drawn to the the faith, he soon became a catechumen, that is, one actively studying the faith before baptism into the Church.

During this time of study, Martin reached the age of 15 and, as his father was a Roman  Officer, Martin was required to enter Roman Military service at this point.  History and tradition are quick to point out that Martin never attempted to get around the requirement and did sign on as an officer, but lived “more like a monk than a soldier.”

Saint Martin was stationed to a place then called Amiens, in Gaul (modern day France).  Tradition hold that it was here that Martin had an experience that changed his life forever.  The story goes that one day, whilst riding toward town one cold winter day, Martin noticed a beggar at the entrance gates.  The man was dressed in threadbare rags, freezing and shivering from the elements and begging for alms.  Martin also noticed that EVERYONE else passed the beggar by without any notice, neverminding any charity or love toward the man.

Martin’s heart was touched and the legend continue that he removed his heavy military issued cloak, and with his sword, cut the cloak in half.  Keeping half for himself and giving the other half to  the poor beggar.  Later the following night, Martin, while sleeping, saw Christ surrounded by throngs of angels.  And in this vision, Our Lord was wearing half of the cloak that Martin had given the beggar.  Martin was then asked, in the vision, whether or not he recognized the piece of the cloak – which he did.  Then Christ was heard to say to the surrounding angels:  “Martin, not even yet baptized, has covered ME with his cloak.”  Upon waking from the vision, Martin immediately looked to be baptized into the faith fully.

Closer to the age of twenty, Martin, with a few soldier-comrades, was summoned by the Emperor Julian and given orders to go and take care of the Teutonic invasions happening in Gaul.  Martin’s conversion of heart kicked in and he was compelled to tell the emperor that he must refuse the order.  Saying to Emperor Julian: “Up to now, I have served you as a soldier, allow me henceforth to serve Christ.  Give the bounty and orders to others who are going out to battle.  I am a soldier of Christ and it is not lawful for me to fight.”   You might say that Saint Martin is one of our earliest Christian examples of a “conscientious objectors.”

However, Emperor Julian, not being accustomed to being refused ANYTHING, had Martin hauled off to prison.  Fortunately his incarceration ended rather quickly with truces being put into place.  Martin, now free and on the go, then travailed to Poitiers, and under the Bishop and friend, Hilary, was ordained a deacon into the church.

Other travels took Martin back toward his homeleand.  There he converted his mother and many others to the Christian faith.  To his dismay, Martin could not convince his father to give up his pagan beliefs.  Martin later felt a religious calling to a life of solitude.  His friend, the Bishop Hilary, gave him a small tract of land in what is now central France.  There, in this place called Liguge, Martin was joined by hermits and other holy men and then established a monastery, said to be the fist established in Gaul. It survived until the early 17th Century.

For the next 10 years of his life, Martin lived as the Prior of the monastery – directing the other brothers lives and preaching in nearby areas.  Around 371, the Bishop of Tours died, and so popular was Saint Martin with the locals, it was urged that he take up the vacant post.  Reluctantly, and actually with a bit of trickery from the locals, Martin did accept the post as Bishop of Tours.  But, even in this high post, Martin continued to live a strict and austere and simple life.  Martin soon grew tired of the rigorous life as a bishop and longed to return to a simple monastic life.   He retired from his post as Bishop and went Marmoutier, where he founded another simple monastery that later became a famous abbey of the region.  In fact, later Bishops of Tours were often selected from among the brothers and priests of Saint Martin’s monastery.

During his life, Saint Martin was a true soldier for Christ.  He stood up to Emperors and fought heretics.  He won many souls for Christ and to him are attributed many, many other legends and miracles.

Closing in on the year 400, St. Martin began to have premonitions of his death and eventually sickness fell upon him.  Ton the 8th of November, in the year 400, Saint Martin fell asleep in the Lord.  He was buried 3 days later, at Tours.  It is said that over two-thousand monks, nuns and religious attended his funeral.  Soon after his burial, a chapel, then basilica where built upon Saint Martin’s grave.  Both, long since destroyed, currently a modern church is built upon the site – which, still, annually has thousands of faithful pilgrims visit it.