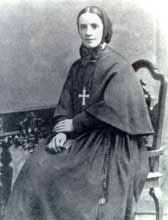 St. Frances Xavier Cabrini was born Maria Francesca Cabrini on July 15th, 1850 at Sant’Angelo Lodigiano.  The young girl with was drawn to a life of religious service at an early age. She was influenced by her older sister, her uncle, a priest who captured her imagination with stories of missionary work, and also by the Daughters of the Sacred Heart,  who prepared her for a normal school diploma in 1870.

Francesca who had already vowed herself to virginity at the age of 12, attempted to enter the Daughters of the Sacred Heart in 1872, but she was declined due to health reasons as had contracted smallpox whilst caring for the sick during an epidemic, and although she was healed from such, she still did not seem to be strong physically.

She found employment briefly as a teacher in Virdardo and then she was persuaded to do charity work at an orphanage at Codogno, and it was here that she took her vows in 1877.

In thissame year she was appointed to be Prioress of her new foundation, The Institute of Missionary Sisters of the Sacred Heart, which at the onset consisted of seven orphaned girls whom she had trained.

Mother Cabrini had much to do in Italy but very soon craved fulfillment ofa lifelong wish to do missionary work in China but Pope Leo XIII and Bishop Scalabrini of Piacenza instead urged her to carry her talents to Italian immigrants in the slums of the United States, and dutifully, but with reluctance, she sailed in 1889 with six sisters.

From modest beginnings in the New York City area,  Mother Cabrini and her followers gradually built a national and international network of some 70 institutions.

In 1909 she became an American citizen. Her journeys on behalf of her mission, which included 30 crossings of the Atlantic, occupied much of her time and energy, although she remained frail physically throughout her life.

At the breakout of World War I in Europe, she dedicated her hospitals, and nuns in Italy to the war effort there.

On December 22nd, 1917, she after a brief illness, died of malaria in her own columbus Hospital in Chicago.

Cardinal George Mundelein of Chicago and others launched the process of her canonization in 1928. She was pronounced Venerable in 1933, was beatified in 1938, and was canonized in 1946.

Her remains originally at West Park in New York, are now enshrined in the Chapel of the Blessed Mother Cabrini High school in New York City.

St. Frances Xavier Cabrini, though declared to have effected the two miracles needed for canonization, is best remembered for her energetic labours among immigrants and the poor in the United States and for establishing and the staffing of orphanages, schools, hospitals, convents and other facilities throughout the world.