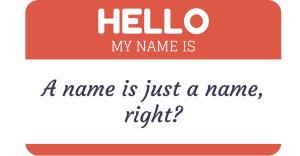 Is his name Jesus or Emmanuel?

I always had this question growing up, and it fueled many other contradictory statements that I found in the Bible and the Gospels I heard at Mass.

For a young child, and even for some of us adults, these name switches can be unnerving. (And for now, we’ll leave out all that bit about not having Joseph as his real father…some things are a little too much for kids.)

But wait. Now that I think of it, isn’t that the whole point of the differences between then and now, between good catechesis and the stuff some of us were served up in Sunday school and in homilies? These differences, and sometimes contradictions, confuse us if we are interpreting them from our present lives and experiences…and if we are not taught from an early age that the original language of the Bible was not English, or French, or even Latin.

Let me give an example for a minute: do you remember the exercise where there is a room full of people and one person is told a story. Then she must pass that story, in secret, to the next person, who in turn passes it on, until everyone is filled in. Then the last person tells the whole room the story out loud, and then the first does the same. Usually, there are two very different stories related, to much laughter and some embarrassment.

Now let’s go back to Jesus and Emmanuel.

And then—Emmanuel. This means “God is with us” according to the Gospel for today. This is the same kind of name that we read in Isaiah: “And he will be called Wonderful, Counselor, Mighty God, Everlasting Father, Prince of Peace.

So what are we to do? Unlike in the example of the different stories I just mentioned, we have written records, translated and interpreted as they have been for two thousand years. What we call our Savior is not the issue, though, is it?

Just like children waiting for Christmas and the presents under the tree, the man’s name, the name of the holiday, the narrative, the celebration just gives us some touchstone to refer to when we really mean God will save us from our sins. And when we really mean on this day God came to live among us to show that he is with us.

As we hear in today’s Responsorial Psalm, this is the story we are being told, no matter how many translations there are:

For he shall rescue the poor when he cries out,

and the afflicted when he has no one to help him.

He shall have pity for the lowly and the poor;

the lives of the poor he shall save.

Much of our daily lives are taken up with the surface things. We skim over the underlying meanings because we have context through which to understand them. And sometimes it seems at this time of year we just skim over the “true meaning of Christmas.”

But isn’t this quite natural, since we grow up knowing that Christmas means presents and lots of food and wonderful music.  Truly a magical time…for most of us, that is.

So while today is just a week away from Christmas Day, and while if we were kids we’d be looking forward to school recess and all those presents, let’s just take a moment to dig deeper. To think of the name the angel gave: God will save us from our sins. To think of the name Isaiah prophesied: God is with us.

Think of these names for a moment. Here are presents and celebrations enough to give us thought every day of our lives. Saved from our sins by God who is right here. The heavens don’t have to open for us to be in the company of angels and in the bosom of our Lord. We are already with them and he is in us and we are in him.

As the Lord lives, we have arrived and we know him as he is. It just takes the heart of a child.

Today Lord, help us in our anticipation to know that the wait is over and the fire is lit, the feast is on the table, and the candle is in the window.