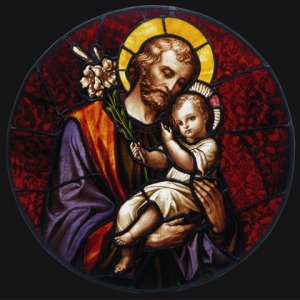 St Joseph, the husband of the Blessed Virgin Mary, whom we commemorate today, was a very humble and a Holy man. He was chosen by God our heavenly Father, to be the earthly step-father, guardian and protector, alongside Mary, of his only Begotten Son, our Lord Jesus Christ.

Although we know little about the life of Joseph, we know that by occupation that he was a carpenter, for it tells us in Matt 13.55, about people asking of Jesus, “Is this not the carpenter’s Son?”

Joseph supported Mary when he found out she was pregnant. He did not wish to disgrace her, so decided to divorce her quietly, but he had a dream from an Angel who reassured him about Mary’s pregnancy and that she was pregnant by the Holy Spirit, and the child would be the Son of God. Joseph accepted the news from the angel and accepted both Mary and the then Unborn baby and after Jesus was born, Joseph brought him up as his own

Joseph was the embodiment of true faith and without question he was obedient to all that the heavenly Father asked of him.

When an angel visited Joseph a second time after the birth of Jesus, to tell him of the danger his family was in, he immediately obeyed, left everything he owned and took his family to the strange land of Egypt, where they remained until an angel visited a third time to tell Joseph it was safe for the family to return. (Matt 2:12=23).

Can you imagine when in LK 2:41=52, when Jesus was found in the Temple after going missing, how anxious and worried Joseph (as well as Mary), must truly have been? Here was Joseph, who had spent many years moving his family and hiding them to keep Jesus safe, only to suddenly find him missing on an annual Passover? I can well imagine very mixed feelings upon finding him, relief, and joy to name just two!!

Joseph represents the true meaning of faith, of integrity, obedience, and of the vital role of fatherhood that God had entrusted to him.

As Joseph is not mentioned in the Holy Word of God during Jesus’ public ministry, we can only assume that Joseph had died prior to this time. We don’t know when Joseph was born or died, but we do know about his character :”He was a righteous man” (Matt 1:18).

Joseph is a perfect example of fatherhood and there is much we can learn from him about how to bring up our children in a righteous way, as well as learning in our lives  from his examples of faith and obedience.