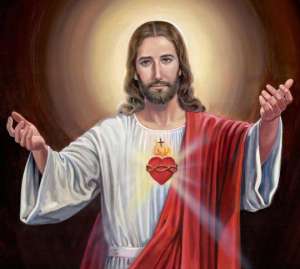 The sacred heart of Jesus Christ is a symbol that entered the world through the mystical experiences of several Roman Catholic nuns to whom the pierced Heart of the Savior appeared in visions. Yet it was Saint Mary Alocoque who perceived, through many supernatural visions of Christ’s passion, the symbol of the inflamed pierced heart, encircled with thorns. This vision is known as the “great apparition”, which occurred during the octave of Corpus Christi, in June of 1675.

In this vision Jesus entrusted Saint Mary with the mission of propagating the new devotion. Jesus continued to appear to Margaret Mary and made revelations to her until 1675. It wasn’t until 1856, that Pope Pius IX decreed that the feast should be regularly celebrated throughout the world.

What Does the Sacred Heart Symbolize?

Catholics (and people in general) are visual people. Jesus knows this about us that’s why in addition to using parables to give us messages, He uses images to convey His messages. Seeing an image of the Heart of Jesus with thorns and the cross and flames certainly grabs our attention and speaks to us. He is saying, look at My Heart and see what I am feeling. The thorns around His heart are a representation of our sins and how our sinning pierces His heart. The flames and the cross serve as a reminder of the suffering He endured for our salvation and of His burning love for us. The dripping blood represents the blood Jesus shed for our salvation. That’s a pretty powerful message! But let’s explore this image in depth, to understand it fully.

The Sacred Heart is often depicted in Christian art as a flaming heart shining with divine light, pierced by the lance-wound, encircled by the crown of thorns, surmounted by a cross, and bleeding. Sometimes the image is shown shining within the bosom of Christ with his wounded hands pointing at the heart.

In conclusion:
The sacred heart is a symbol of great self sacrifice and unconditional divine love for all beings captured in the actions and deeds of Jesus Christ. When our love and compassion overcomes and sacrifices our own ego, our spirit will be liberated and transform our entire being into a holy one. If we align ourselves with meaning of the Sacred Heart and the liberating vibration of Christ consciousness, this great symbol can become a gateway for us to change the world through our expression of unequivocal, genuine love. So let us love one another unconditionally.

As my Father has loved Me, so have I loved you.