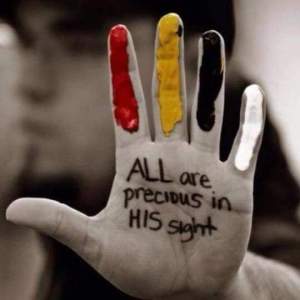 This week marks the beginning of another school year for many children, my granddaughter included. She starts kindergarten this year, which means a new school, new friends, and a new routine. I imagine she is quite nervous her first day, but probably not as nervous as her Mom. As a grandmother, I admit to also being nervous. Will she like school, or her teacher? Will she make friends easily, or will the other kids make fun of her because she is different (being of mixed-race)? I also admit to fearing for her safety. Though school systems now have multiple safety measures and protocols in place, I imagine a lot of parents, grandparents, aunts, and uncles, will worry about their little ones. But there is someone who is always looking out for our children-Jesus.

I remember when I was little, attending a baptist church in West Virginia, one of the first songs we learned was “Jesus Loves the Little Children”, written by C. Herbert Woolston (1856-1927). The tune for the hymn was composed by George F. Root. It goes something like this:

Such a simple little tune, but it carried a big message. We all knew, from the youngest toddler to the oldest teenager, that no matter what, Jesus loves us! Doesn’t matter the color of our skin, if we are rich or poor, if we sometimes act out, we are always loved and cherished. This is illustrated so clearly in Mark 10:13-16:

“People were bringing little children to Jesus to have him touch them, but the disciples rebuked them. When Jesus saw this, he was indignant. He said to them, “Let the little children come to me, and do not hinder them, for the kingdom of God belongs to such as these. I tell you the truth, anyone who will not receive the kingdom of God like a little child will never enter it.” And he took the children in his arms, put his hands on them and blessed them.”

What a powerful vision ~ this holy man, the Son of God, welcoming the little children to sit with Him a spell. For many children, I’m sure this is the first time they saw Jesus, who must have seemed like a stranger to them. Yet, they gladly went up to Him, as if they knew there was not anything to fear.

Even today, many children are eagerly seeking a personal relationship with Jesus. There was a movie out recently (based on the bestselling book), “Heaven Is For Real”. Its about the story of a 4-year-old boy named Colton Burpo. Colton claims to have visited Heaven during a near death experience. He shares his story about Heaven with his curious father, Todd Burpo. Of course, Colton’s family is not at first sure what to think of his story and his visit to Heaven. What I found interesting about this story is it also makes mention of a young Lithuanian girl, who felt compelled from a very young age, to draw the face of Jesus. This extraordinary little girl is Akiane Kramarik. At age 4, Akiane painted her vision of Jesus Christ, which is replicated in the film. Born in 1994 in Mount Morris, Illinois, to two Atheist parents, Akiane was seeing visions of God, Jesus and Heaven. What first began as pencil drawings, Akiane kept replicating these visions into beautiful expressions of art and moved to pastels. By 6 years of age, Akiane switched to acrylic paint and then oils. What an awesome example of Jesus’ words, “Let the children come to me, and do not hinder them”.

Here are just a couple of examples from the Bible of Jesus showing His love and mercy for the little ones:

“Once more he visited Cana in Galilee, where he had turned the water into wine. And there was a certain royal official whose son lay sick at Capernaum. When this man heard that Jesus had arrived in Galilee from Judea, he went to him and begged him to come and heal his son, who was close to death. “Unless you people see signs and wonders, Jesus told him,“you will never believe.” The royal official said, “Sir, come down before my child dies.”  “Go,” Jesus replied, “your son will live.” The man took Jesus at his word and departed. While he was still on the way, his servants met him with the news that his boy was living. When he inquired as to the time when his son got better, they said to him, “Yesterday, at one in the afternoon, the fever left him.”

“Now when Jesus returned, a crowd welcomed him, for they were all expecting him. Then a man named Jairus, a synagogue leader, came and fell at Jesus’ feet, pleading with him to come to his house because his only daughter, a girl of about twelve, was dying. As Jesus was on his way, the crowds almost crushed him. And a woman was there who had been subject to bleeding for twelve years, but no one could heal her. She came up behind him and touched the edge of his cloak, and immediately her bleeding stopped. “Who touched me?” Jesus asked. When they all denied it, Peter said, “Master, the people are crowding and pressing against you.” But Jesus said, “Someone touched me; I know that power has gone out from me.” Then the woman, seeing that she could not go unnoticed, came trembling and fell at his feet. In the presence of all the people, she told why she had touched him and how she had been instantly healed. Then he said to her, “Daughter, your faith has healed you. Go in peace.” While Jesus was still speaking, someone came from the house of Jairus, the synagogue leader. “Your daughter is dead,” he said. “Don’t bother the teacher anymore.”  Hearing this, Jesus said to Jairus, “Don’t be afraid; just believe, and she will be healed.” When he arrived at the house of Jairus, he did not let anyone go in with him except Peter, John and James, and the child’s father and mother. Meanwhile, all the people were wailing and mourning for her. “Stop wailing,”Jesus said. “She is not dead but asleep.” They laughed at him, knowing that she was dead. But he took her by the hand and said, “My child, get up!” Her spirit returned, and at once she stood up. Then Jesus told them to give her something to eat. Her parents were astonished, but he ordered them not to tell anyone what had happened.”

We now know that Jesus truly does love all the children of the world. Over the course of His ministry, Jesus often presented children as an example of the type of faith adults are to have. When Jesus blessed the children, He told His disciples, “Truly I tell you, anyone who will not receive the kingdom of God like a little child will never enter it” (Mark 10:15). In another instance, when the disciples were fighting about who would be the greatest in God’s kingdom, Jesus brought a child to stand in their midst. He then chided His disciples: “Truly I tell you, unless you change and become like little children, you will never enter the kingdom of heaven. Therefore, whoever takes the lowly position of this child is the greatest in the kingdom of heaven” (Matthew 18:2–4). According to Jesus, the qualities of children, including humility and simple acceptance were crucial for anyone who wishes a closer relationship with our Father.