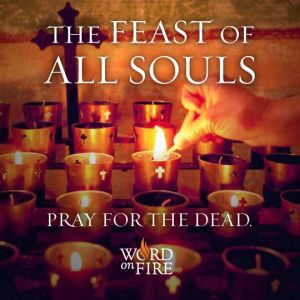 The term purgatory arose after the time of the apostles, as did the terms Trinity, Christianity, Second Coming, and Bible. But the idea of purgatory was already present before Jesus was born. We find a Jewish hero named Judas Maccabeus, about a century and a half before Jesus, praying for the dead and specifically asking they be forgiven their sins after they have died (2 Macc. 12:43–45). This practice, known as the kaddish, was well established among Jews in Jesus’ own time. (Jews have historically believed, and many still believe, that the souls of the faithful departed undergo a period of purification which may be aided by the prayers and charity of the living. The Kaddish Foundation is a modern example of this ancient belief in action.)

Consider this reading from The Book of Wisdom:

The souls of the just are in the hand of God,
and no torment shall touch them.
They seemed, in the view of the foolish, to be dead;
and their passing away was thought an affliction
and their going forth from us, utter destruction.
But they are in peace.
For if before men, indeed, they be punished,
yet is their hope full of immortality;
chastised a little, they shall be greatly blessed,
because God tried them
and found them worthy of himself.
As gold in the furnace, he proved them,
and as sacrificial offerings he took them to himself.
In the time of their visitation they shall shine,
and shall dart about as sparks through stubble;
they shall judge nations and rule over peoples,
and the LORD shall be their King forever.
Those who trust in him shall understand truth,
and the faithful shall abide with him in love:
because grace and mercy are with his holy ones,
and his care is with his elect.  (Wisdom 3:1-9)

Likewise, we find the New Testament frequently assuming the existence of purgatory. Jesus, during his time in the grave, is said by Peter to have “preached to the spirits in prison, who formerly did not obey” (1 Pet. 3: 18–20). Similarly, Jesus teaches that certain sins—notably unforgiveness—will be liable to judgment and imprisonment in the next. But he also implies this punishment is not necessarily eternal: “Truly I say to you, you will never get out until you have paid the last penny” (Matt. 5:21–26). Such imagery fits neither heaven—where there are no prisons—nor hell, where there is neither repentance nor “getting out” and therefore no point in preaching. It does, however, fit purgatory.

Jesus also implies the existence of purgatory or “forgiveness in the age to come” when he tells his disciples, “Whoever says a word against the Son of Man will be forgiven; but whoever speaks against the Holy Spirit will not be forgiven, either in this age or in the age to come” (Matt. 12:32). The Church after Jesus did not, therefore, “invent” purgatory. On the contrary, it simply repeated and clarified what Jesus and the apostles had taught them concerning the promise of hope for the afterlife.

This is also why we pray for the dead.  We believe that the purification of the souls in Purgatory can be hastened by the actions of the faithful on earth. This teaching is based also on the practice of prayer for the dead mentioned as far back as 2 Maccabees 12:42–46. In the West there is ample evidence of the custom of praying for the dead in the inscriptions of the catacombs, with their constant prayers for the peace of the souls of the departed and in the early liturgies, which commonly contain commemorations of the dead. Tertullian, Cyprian and other early Western Fathers witness to the regular practice of praying for the dead among the early Christians. The theological basis for the feast is the doctrine that the souls which, on departing from the body, are not perfectly cleansed from venial sins, or have not fully atoned for past transgressions, are debarred from the Beatific Vision, and that the faithful on earth can help them by prayers, alms deeds and especially by the sacrifice of the Mass. Because Purgatory is outside of time and space, it is not necessarily accurate to speak of a location or duration in Purgatory.

So what does Purgatory mean for us today?  It means what it has always meant: hope. Purgatory is the assurance that there will, in the end, be absolutely nothing to dim the mirror of our lives from reflecting the glory of God. We who have been captive to sin for so long will be released. Moreover, as sharers in the life of Christ, we have an extraordinary promise from him. For he tells us, “Truly, truly, I say to you, he who believes in me will also do the works that I do; and greater works than these will he do, because I go to the Father” (John 14:12).

In other words, we not only receive grace from him, we do his works of grace with him, for we are “fellow workers” with Christ (1 Cor. 3:9). This means among other things that, as he prays for us, so we can pray for one another with his power and authority. And such prayers can be made not only for the living but for the dead as well. We can, therefore, help those in purgatory who are still being purified, just as we can help those on earth—by our prayers and offerings of love, especially in the Mass.

As Paul tells us, “We, though many, are one body in Christ, and individually members one of another” (Rom. 12:5). That unity with God and with each other is not severed by death. We can continue to pray for those who have died with the hope of Christ that our prayers will be of real help to them as we “bear one another’s burdens, and so fulfill the law of Christ” (Gal. 6:2).

So, having said as much, I wish each of you a most blessed and holy All Soul’s Day and ask that you continue to pray for me and for mine, The Church Triumphant, The Church Militant, and The Church Penitent.  Amen.