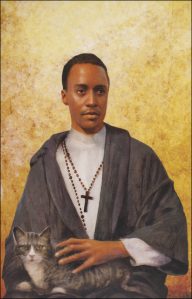 I have a mixed race granddaughter. She is so bright, curious, and sweet that all who meet her cannot help but be charmed. I cannot imagine any child born now to mixed race parents being shunned, especially by their father or mother. But that was not always so. Imagine a social worker’s case that goes something like this: two mixed race children are abandoned by their father. The children’s food and clothing are inadequate. The older child, a boy, is made to go out and do the shopping and the household chores. The mother, distraught with grief at being abandoned, subjects the boy in particular to verbal and physical abuse, telling him that he is responsible for his father’s leaving. Yet the child is found to be sweet-natured, intelligent and obliging, tirelessly eager to please the mother who seems not to want him. What would you make of the situation? The boy just described, whose heroic charity was evident from the time he was young, grew up to become one of the Dominican Order’s most beloved saints: Martin de Porres.

Martin was eventually able to leave behind the greatest cross of his childhood when his father, a Spanish nobleman serving as a provincial official in Peru, finally acknowledged his dark skinned twelve year old son as legitimate and apprenticed Martin to a barber surgeon. Martin quickly acquired a following of patrons due to his charity and his skill in medical care. However, after several years, Martin discerned Jesus calling him to enter the Dominican Order in Lima. He shared two strong devotions dear to the Order and its saints: devotion to the Rosary and to the Queen of the Most Holy Rosary, and a powerful love of the Eucharist. Martin did not aspire to be a preaching friar, nor even a lay brother, but asked for the lowest position in the convent as a “helping” brother. After nine years and significant contributions to the community, he would go on to make solemn vows as a lay brother.

Martin was put to work doing menial chores, work that he welcomed and never complained of doing. On the contrary, he regarded his chores as if they were the highest honors. The community also used Martin’s previous training as a barber and a surgeon, eventually assigning him to the infirmary due to his remarkable expertise in healing. Stories abound of his cures: of his coaxing a sick friar’s appetite by miraculously producing out-of-season fruit, and of life-threatening fevers and infections instantly abating at the mere touch of Martin’s hand. It is said that he knew ahead of time whether a friar would recuperate or die. St. Martin could well be called the “St. Francis of Assisi” of the Dominican Order for his love of animals. The story of his relocation of a large number of destructive mice, while incredible, is regarded as true. Recognizing the havoc the rodents were causing, He was seen escorting an orderly line-up of several hundred mice out of the convent and into the garden where they were promised a daily feeding by their kindhearted benefactor.

Perhaps with his own childhood in mind, Martin had a great love for street urchins, orphans and unwanted babies in Lima. It became known that Martin would accept unwanted children born out of wedlock. At first he placed them with his sister Juana, but numbers grew so great that a separate home became necessary. By his own efforts, Martin built the Orphanage of the Holy Cross from the ground up. The orphanage still exists in Lima today as the Colegio de Santa Cruz.

Martin literally lived the Last Will and Testament of St. Dominic: “Have charity, guard humility, make your treasure out of voluntary poverty.” His love of poverty was unaffected; he had been poor all his life, and would have nothing to do with what he considered “luxuries.” Martin wore the most ancient habit in the convent, yet never allowed it to look shabby. He preferred old shoes to new ones. He served as an example of humility, as described by the parable told by Jesus in Luke 14:7-11:

“When he noticed how the guests picked the places of honor at the table, he told them this parable: “When someone invites you to a wedding feast, do not take the place of honor, for a person more distinguished than you may have been invited. If so, the host who invited both of you will come and say to you, ‘Give this person your seat.’ Then, humiliated, you will have to take the least important place. But when you are invited, take the lowest place, so that when your host comes, he will say to you, ‘Friend, move up to a better place.’ Then you will be honored in the presence of all the other guests. For all those who exalt themselves will be humbled, and those who humble themselves will be exalted.””

Martin died a holy death surrounded by the friars of the Holy Rosary Convent chanting the Salve Regina. His symptoms were the same as those that defined St. Dominic’s last moments. In fact, toward the end, when asked, Martin indicated that his holy father was actually present, along with St. Vincent Ferrer. When he was canonized in 1962 by St. John XXIII, the Pope observed in the canonization ceremony, “Martin was not an academic but possessed ‘the true science that ennobles the spirit,’ the ‘light of discretion’ of which St. Catherine of Siena speaks.” Guy Bedouelle adds that “the Church… has need of authentic intellectuals [but] looks first for holiness of attitude, the fruit of humility.” St. Martin preached Christ through his charity, humility and poverty. He stands as a holy reminder that, in a religious order known for glorifying God by intellectual achievement, “the greatest of these is love.”