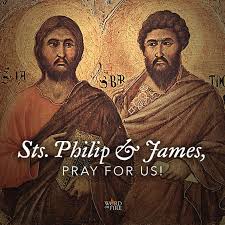 My dearest brothers and sisters in Christ, today we come together to celebrate the feast of not just one, but two of Christ’s Twelve Apostles, these being, St. Philip and St. James. Both of  these Apostles worked tirelessly for the sake of the people of God, and just as the other Apostles had done, they spread the Good News to many.

St. Philip is also known as Nathanael, he was a learned and a wise man of Israel. He was told he needed to be fluent in Greek, and eventually he went on to preach about the Lord and His truth in regions of Greece and of Roman Asia, he went from city to city, preaching to the masses and he gained for the Church many new converts and members.

St. Philip even managed to convert the wife of the proconsul of a region where he ministered, by his miracles and from his preaching. The proconsul was enraged and ordered St. Philip to be arrested, and he together with the other Apostle, St. Bartholomew, and other disciples were crucified upside down. And  St. Philip preached to the crowd gathering there from his execution cross, in such a way, that they wanted to release him, but St. Philip refused to allow this.

The other Apostle which we celebrate today, St. James the Greater, was the brother of St. John the Apostle,  a fisherman along the Lake of Galilee, whom Jesus called together with His other Apostles, St. Peter, St. Andrew and St. John his brother. St. James played an important role in the early Church, spreading the Good News of God’s salvation after Christ’s resurrection and ascension into heaven.

St. James went to preach the Good News to faraway regions such as the province of Iberia in what today we know as the country of Spain, where he spread the Gospel to the people there and helped to establish the Church far from its origins in Jerusalem. He was  renowned especially in the region known as Santiago de Compostela, where his body lies buried, because it was there where he apparently did his works of evangelisation.

king Herod arrested St. James when he returned to the Holy Land, and in order to please the Jewish authorities, the Pharisees and the chief priests, had him executed. St. James was among the first of the Apostles to meet his end on earth through martyrdom.

The tireless works and commitment to the salvation of mankind of St. James and St. Philip can still be felt as making an impact even today. Like these Apostles of the Lord, we  need more and more people who are willing to commit themselves to the Lord’s  service, and to walk in His path just as these two Apostles did.

Truly, it will not be an easy task for us, as there is worldly opposition against all those who are faithful in the Lord’s service and who keep their faith. But Jesus reminds us yet again in the Gospel, that we who believe in Him, have seen the Lord Himself through Jesus, and by our faith in Him, we have been justified. And because we know the Lord, we will also be obedient to Him, we would be blessed and saved.

During the last remaining part of the season of Eastertide,  let us reflect on our own lives, and on how we have acted in our lives so far. Have we been fully committed to our Lord, and have we been truly faithful to Him? Can we call truly ourselves Christians? Do we not only believe in the Lord through our mere words, but also through our actions?

The examples of the  lives and service of the Apostles St. Philip and St. James show us that there are still many things that we can do as the followers of Christ in order to fulfil the commands which our Lord has given us, within our lives in His service.  Both these Apostles served with tireless zeal and with vigour, and despite the challenges and the difficulties that faced them, these did not prevent them from carrying out the missions which the Lord had entrusted to them.

Let us all therefore look forward, and as we soon will celebrate the Solemnity of Pentecost Sunday, let us all recommit ourselves, and rediscover the true gifts of the Holy Spirit which have been given to us, and to make use of these gifts in order to help those who are still in darkness, by showing them the love of God manifested through each and every one of us as the faithful servants of our Lord, so that more and more souls may see the light of God and be saved.